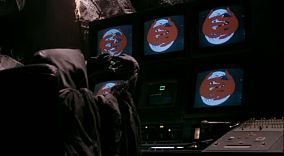 Jean Diaz is a divorced single parent of David and an animator who hasn't made a single film for a decade, though he is working on a script for an apocalyptic film about violence, "Blood". Death, who can watch people and influence events in a control room full of screens, causes Jean to have a car crash. Death then takes the dead Jean and blackmails him to animate the film "Blood" or else David will not recover from the crash. David is certain that Jean is held captive in a dungeon, but his mother, Catherine, doesn't believe him. Shocked that Death intends to use the ending of "Blood", namely a global flood of blood, to kill all of humanity, Jean rebels, cuts its hand off and escapes through a passage. He then reunites with David on a beach.

Fantasy "The Passage" is one of the more bizarre movies from the 80s, even for a French art-film. The deeply allegorical story about the personification of Death that can influence events and separate a father from his child talks about some universal themes of loss, tragedy, bitterness and fatalism that constantly disrupt the lives of everyone, yet it does so in a very didactic, pretentious or heavy handed way of preaching, instead of naturally knitting it into the story and its events. Some of the subplots lead nowhere, such as the character of Catherine who does not play any role in the resolution. Other elements, while strong and creepy, were not exploited to their fullest: for instance, Death is seen sitting in a control room of sorts, in front of five screens, and typing in events on the computer keyboard which then really happen in real life, such as Jean's "mysterious" car crash or his surgery going wrong, as some sort of a modern Moirai that manipulates destiny, yet such an expressionistic image (and concept) were elaborated in a far superior way in the form of character Christof in "The Truman Show". The ending also seems rather abrupt, whereas the story drags here and there. Still, some of the images have some almost surreal-expressionistic level to them, which makes the movie stand out as a cult peculiarity of the subconscious, from clips of Jean's fictional animated film (a man in a wheelchair watching "King Kong" on TV goes to open the door, only be killed by unseen criminals) to Jean battling Death to escape from the control room.