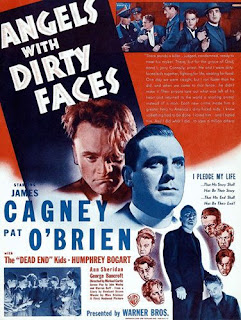 Juvenile delinquents Rocky and Jerry attempt to rob a train at a station, but the police catches Rocky. As years go by, their paths diverge: Jerry becomes a priest, while Rocky becomes a criminal. After being released from prison, Rocky meets up with Jerry again, as well as with a girl with whom he often argued, Laury. Jerry is disturbed that Rocky takes six teenagers under his wing and introduces them to small time crime. Rocky's lawyer, Frazier, gives Rocky a 100,000$ and they use the moneys to bribe the city officials to gain immunity for their racketeering. When Jerry teams up with an newspaper to expose Rocky's crime web, Frazier wants to kill Jerry, but is killed by Rocky. The police capture Rocky in a raid who is sentenced to death. Jerry then persuades the six teenagers to abandon crime and take on the right path in life.

A magnificent masterpiece, one of the best crime films of all time, "Angels with Dirty Faces" is an intelligent, concise, incredibly measured, sophisticated and genuine film experience, in short, an all-encompassing depiction of crime and its effects on people, while offering James Cagney in his finest hour. As with many films, even "Angels" are a 'product of its time': during the Great Depression, poverty fermented circumstances for numerous people to turn to crime in order to survive in America, and thus the gangster film genre was born in the 30s, trying to cope and understand such a grim situation. The whole film is meticulously set-up, from the opening act that already establishes the relations between Rocky, Jerry and Laury as kids (Rocky's and Laury's exchange is inspired writing: "Scram before I wipe the floor with you!" - "You better wipe your nose, first!"; followed by him descending down the ladder, knocking her books on the floor and pulling her hat down over her face), only for this to come full circle in the second act, when Rocky, now a grown up, returns from prison to his neighborhood, while Laury recognizes him and "settles the score" by slapping him and pulling his hat down his face, causing him to chuckle. The cast is impeccable, including even Humphrey Bogart in a supporting role of Rocky's lawyer, Fraizer.

Director Michael Curtiz rises to the occasion by enriching the story with several cinematic techniques and stylistic touches (the frame of Rocky shooting at the camera's POV "freezes" and shrinks in order to become a photo of a news headline about Rocky's crimes; the camera pulls away from a newspaper title of a corruption scandal to reveal a hand that drops the newspaper, belonging to lawyer Fraizer, who is directly involved in the case...) though the screenplay by John Wexley and Warren Duff is the undeniable highlight, creating a rich storyline that enables the cast to all have their moments. The Hays Code forbade extreme moments in film during that time, and thus gangster Rocky was juxtaposed with his childhood friend, priest Jerry, for moral counterbalance, showing that people can resist social fatalism, yet several subversive moments managed to avoid turning this story too preachy or melodramatic: in one sequence, Jerry appeals to the six teenagers to abandon the underground shady pub and its vice, yet the boys won't listen to him. Disappointed, Jerry walks away from the casino, but as one man cynically asks him: "What's the matter? Boys won't follow you to heaven?", Jerry just turns and smacks him in the face. Later on, Jerry also tries to reason with Rocky to stop corrupting the kids, but admits this in a powerful line: "What earthly good is it for me to teach that honesty is the best policy when all around they see that dishonesty is a better policy? That the hoodlum and the gangster is looked up to with the same respect as the successful businessman or the popular hero?". Jerry's attempts to try to expose Rocky's crime web is also subversive filmmaking, giving an incredibly sharp commentary at society (big criminals, once they have enough money, can bribe city officials to gain immunity and even try to censor the press), which, together with the film's theme of a distorted meritocracy, shows Curtiz and classic Hollywood at its Zenith, achieving a full artistic width and a spectrum of viewing experience.