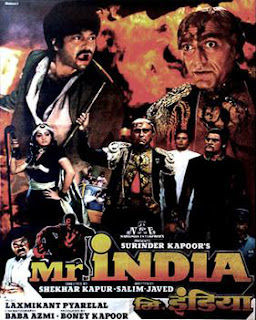 From his island, Villain Mogambo is commanding his henchmen to cause criminal activity so that he can take over the Indian subcontinent. In the meantime, Arun is a seamy, but good-hearted man who turned an old house into an orphanage for kids, which he runs together with cook Calendar. When the debts rise, he wants to place an add in the newspaper to rent a room in the house, and finds the tenant in reporter Seema — she at first didn't know about a dozen kids living there, but gets to like them. Arun finds out that his late father created a wrist watch which can turn anyone invisible. Arun wears it and becomes Mr. India, fighting against Mogambo's henchmen who want to banish the orphanage to create an outpost there. When Mogambo's bombs kill a kid, Tina, and the rest are abducted and brought to the island, Arun uses his invisibility to beat up Mogambo and blow up his fortress.

A rare example of a foreign language superhero film, the highest grossing Indian film of 1987, "Mr. India" is a refreshing example of cinema audacity, courageously blending everything, from drama through action, science-fiction, musical up to pure slapstick comedy. Director Shakhar Kapur uses the typical American superhero motives and translates them to India's culture, changing and rearranging them until it all fits, whereas he finds great support in charming two actors, Srideva as reporter Seema and Anil Kapoor as Arun (it does help a lot that he resembles Lou Loomis from "Caddyshack"). The sequences in the improvised orphanage abound with a lot of humor, from Anil's arguments with cook Calendar, complaining that the latter always has "winter sleep", up to his method of waking up the kids from bed by turning on sprinklers above them, whereas the sole sequence where the kids hide because the new tenant, Seema, hates kids (even joking that it would be better if people "would come as grown ups into the world"), until Anil scares her with a cockroach in the room, upon which she agrees that anyone would help, and then he calls for kids for help, who run like a horde into the room and chase the bug away, is a riot. Srideva is also great in the hilarious, now already iconic sequence where she dresses up as Chaplin's tramp, using the invisible Mr. India to win in the casino. The storyline does tend to seem overlong with its unnecessary running time of three hours, since several dance sequences are again superfluous, whereas the ending seems rushed and conventional, yet "Mr. India" has such a contagious energy that every one of its flaws are always compensated at least threefold through sheer ingenuity, wit and pure good old fun.