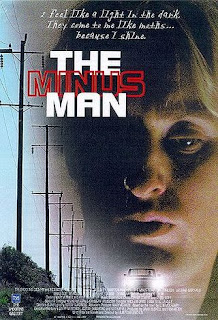 Vann is a serial killer who wonders across the country in his car and randomly kills people by giving them an amaretto drink with poison. He moves into a new town and rents a room in the house of a middle-aged couple, Brian and Jane, whose daughter is missing. Brian helps Vann find a job in the post office. Vann also meets a local girl, Ferrin, who is infatuated with him, but he is uninterested. However, he kills another man, a football player. When Jane is found murdered, the police arrests the increasingly unstable Brian. Vann decides to leave the town in his car.

The only directorial work delivered by Hampton Fancher, the screenwriter know the most for the legendary "Blade Runner", is a peculiar psychological drama "The Minus Man" — even though it handles the topic of a serial killer, not a single scene of violence is shown, since antihero Vann prefers to kill his victims with poisoned amaretto, and instead relies on character development or an almost esoteric mood conjured up thanks to a fantastic, crystal clean cinematography. By not giving any reason for Vann to kill random people, it also contemplates that the mindset of murderers cannot be logically analyzed or deciphered, leaving them without any context, which just adds up to the subtly creepy tone. The film works thanks to small details and cinema tricks, yet its ending is left surprisingly vague and without a clear point: the "why" or "what for" used when the viewers wonder about why a movie was made in the first place are rather evasive, and thus it seems that Fancher's film is more of a stylistic exercise than a truly inspired story with a raison d'etre. Janeane Garofalo stands out again in a gem of a small role as Ferrin who falls in love with Vann — in one of the best sequences, Vann is signing the "get-well-soon" postcard in the post office, and Ferrin shows up, jokingly saying that he should write this as well: "'If you don't hurry back soon, this girl's gonna die of a broken heart. No pun intended. Love, Ferrin." — and the film would have been better if it gave her a bigger role in the storyline.