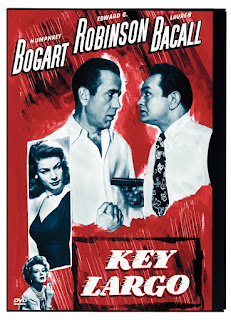 Former Major McCloud takes a bus trip to Key Largo, Florida, the southernmost place in the US, to pay respects to Mr. Temple, a hotel owner in a wheelchair, whose son George died in World War II under McCloud's command. McCloud also meets George's widow, Nora. However, as a storm blocks the island, the three are taken hostage in the hotel by gangster Rocco and his gang, who want to make a comeback in the US. The gang also kills an undercover police officer, Sawyer. When the storm settles, McCloud agrees to drive Rocco and the gang in a boat to the Cuban territory, yet rebels, and in an act of courage, kills them all with a gun, before notifying the police.

"Key Largo" is an ambitious and good crime film, yet compared to some of Humphrey Bogart's and John Huston's greatest classics, it seems somehow meagre, almost as a 'film noir light'. Deliciously set in a remote hotel in Key Largo at night, cut off during a hurricane that works almost as an exterior manifestation of the "storm inside" the two opposing sides - three people held hostage by a gangster and his gang - the film works as an uncomfortable 'kammerspiel', slowly building its dark mood and always keeping its taste and measure, yet a major problem is that once the antagonist Rocco, played by Edward G. Robinson, enters the stage, he pretty much takes over the entire film and overshadows Bogart's McCloud to the point of marginalization, who just keeps quiet in the corner and barely does or say anything throughout the entire time. In "Key Largo", Huston rarely rises to the ocassion, since the film lacks highlights and those inspired examples of writing or dialogues from that era, settling more for standard, easy way out in the form of the simple confrontation between Rocco and his hostages. Several sequences also seem like an empty walk that lead nowhere (for instance, when Rocco forces Dawn to sing for a drink, it is just there to illustrate how mean he is, yet that was already established before) and thus do not engage completely. One of the few examples of greatness is the sequence McCloud describes Rocco ("Whom he couldn't corrupt, he terrified, whom he couldn't terrify, he murdered.") or when Temple prays to God that the storm should destroy them all in the building, which causes Rocco to become extremely nervous. The finale also seems rather anticlimactic, since - although it was suspenseful - it did not stem naturally from McCloud's personality, since it all seemed alien to him and his life.