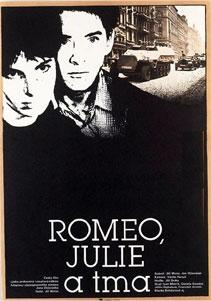 Prague, World War II. In the plan of the Nazis to create a Greater Germany, Jews are deported from the city. Pavel is a young student living in an apartment complex who meets a young Jewish girl, Hanka, and hides her from the authorities in his attic. He has a lot of trouble, since he has to take food from his home to feed her, which causes suspicion from his mother. After the assassination of Nazi chief Reinhard Heydrich, numerous raids sweep the city and one student from Pavel's class is taken away by the authorities. Pavel and Hanka fall in love. However, since the risk gets too high, after being discovered, Hanka voluntarily hands herself in to the Nazis, and gets executed, despite Pavel's plea to save her life.

One of the early Holocaust dramas of European cinema, Jiri Weiss' "Romeo, Juliet and Darkness" is a very good, though a little bit "too safe" played film that hits all the right notes, yet one wishes it was just a tiny bit more daring or unconventional. Setting Shakespeare's eponymous play during World War II, Weiss crafted an ambitious, elegant and emotional drama that is carried both by its tragic plot as well as by its two energetic lead actors, Ivan Mistrik and Daniela Smutna, as well as several distinct supporting characters, such as Blanka Bohdanova who plays the blond vamp girl who is surprised as to why Pavel suddenly does not want to see her anymore. Weiss surges to creative heights the most when he conjures up a genuine feel of 'slice-of-life' of that era, mostly in scarce humorous moments (for instance, during class, the professor notices that Pavel gave a paper note to a student. When the professor asks what he gave him, the student replies with "Nothing" and puts the note in his mouth. The professor asks him to open his mouth, the student swallows and then open his mouth, revealing its is empty, which causes a chuckle among the class; in another moment, Pavel secretly browses through the grandfather's jacket for the keys of the attic at night, despite his mother forbidding him to leave the apartment. Grandfather suddenly enters the room - and tells him to look in the jacket's right pocket, before he leaves, slyly pretending of not knowing anything). It is a fine film, though one wishes the conclusion would have been just a tiny bit more circled out, since the abrupt ending feels somewhat rushed.