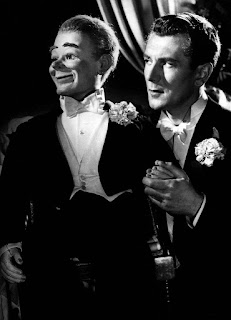 Walter Craig is plagued by nightmares. He stops his car at a country house because it remainds him of a dream he had. He enters and meets six people there - and recognizes them all from his dream, and - although his memory is sketchy - predicts that something awful is going to happen when the lights go off. The guests then start telling horror stories to make the time pass by: Hugh remembers how he dreamt of a driver of a death coach, recognized him the next day in a bus, thus refused to enter and then the bus had a crash; Sally remembers an eerie Christmas party; Mr. Cortland recounts how he got a mirror which reflected him in a foreign room; two golfers compete for a girl, one of them cheats and thus the order commits suicide by walking in the lake, and then haunts the first golfer as a ghost; ventriloquist Maxwell kills a man for suspecting him of stealing his dummy. As the lights go off, Walter kills a man in the house, and enters a nightmare where he is in prison, getting chocked by the dummy. Finally, he awakens from his nightmare - and drives to the house again, not remembering anything.

An anthology of five stories, all framed by a sixth, "Dead of Night" achieved cult status for being one of early British horror films, but holds up surprisingly well even today. The quality differs for each story, some are weaker (the Christmas party), one is good, albeit pure comedy (the golf story), yet at least one managed to rise to the occassion and deliver an all-time classic, inspired horror gem: the one where Mr. Cortland gets a mirror in his bedroom - but sees himself in a foreign, castle-like room in the reflection, which casuses a high spark of mystery, uncertainty and suspense, since the viewers are aware something is "off", but cannot quite put their finger on it until the great pay-off. The 2nd best story is the one involving the driver of a death coach, while the most famed and popular story became the ventriloquist episode, even though its potentials involving the dummy could have been used to a much better level ("Chucky", for instance, showed where this could have went). A saving grace is given overall by a fantastic, scary and expressionistic "nightmare" twist ending, which aligns everything in a harmonius whole and makes sure that the viewers get a worthy pay-off for waiting so long.