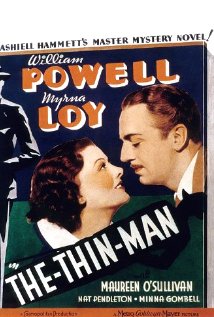 New York during Christmas. Wynant, an entrepreneur in his 60s, finds out his secretary, Julia, took a large amount of money from his company. Soon, Julia is found murdered and Wynant disappears, making him the prime suspect, but his daughter Dorothy thinks he is innocent. Two further murders follow. Detective Nick Charles and his wife Nora, as well as their dog Asta, are summoned to help solve the case. Upon solving the case, Nick summons all the suspects for dinner: he announces that Wynant is dead and that the real perpetrator is his attorney, Maccauley.

The originator of the immensely popular "Thin Man" movie series, which spanned a total of five sequels, "The Thin Man" is a comical restructuring of the 'whodunnit' mystery tales by Agatha Christie, obvious in the finale where the hero summons all the suspects to a dinner—without missing to tease them the whole time before he announces the villain— although it overall takes too much time to finally get into gear. The film also suffers from a tendency to improvise too much, which resulted in several bizarre "misfire jokes" (at least two sequences—Nick shooting at ornaments of a Christmas tree with a shotgun (?!); Nick punching Nora (?!) behind him to get her out of the way so that he can attack a criminal with a gun in front of him, even though he could have easily just pushed her away—could have been either improved or simply cut to remove their heavy-handed toll). W. S. Van Dyke directs the film with a lot of relaxed energy, and the the two excellent protagonists, William Powell and Myrna Loy, carry a fine chemistry throughout, whereas the story has its moments—even though it is a strange disparity that the best lines too often come not from the couple, but from supporting characters, either from Marion ("I don't like crooks. And if I like them, I wouldn't like crooks that are stool pigeons. And if I did like crooks that are stool pigeons, I still wouldn't like you!") or the hidden gem of the story, the youngster Gilbert who is always curious about perverted human nature and says some of the darnedest pre-code lines ever put together ("The police forgot something about Wynant's relationship with his secretary. He is a sexagenerian." - "But we cannot put that in the press!" - "Why not?" - "You know, because of the sex." - "Then just put that he is in his sixties." - "Is *that* what that means?!").