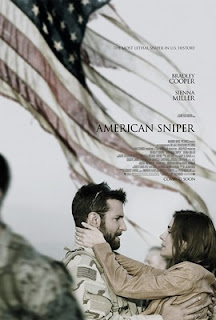 Chris Kyle is a master shooter, taught ever since he was a kid growing up in Texas by his father. Chris marries Taya and enlists as a US Navy SEAL to participate in the Iraq War as a sniper who gives cover for the US soldiers. Even though he only needed to go once, he ended up going four times in Iraq since he was patriotic. With officially 160 registered kills, he became the most prolific sniper in US history. Upon returning to Texas to his wife and two kids, he finds himself suffering from PTSP and trying to help other war veterans. He was killed by a fellow veteran in 2013.

Clint Eastwood proved once again that he is a very vital director with "American Sniper", a dynamic - and modern - film that features no empty walk, and explores the life of the most prolific sniper in US history, Chris Kyle. Even though some critics were tempted to portray Kyle as a simple 'trigger-happy' redneck, he is a far more complex character: the sequence from his childhood, for instance, shows how he was hugely influenced by his father's philosophy who said that people can be divided into three groups: the wolves (the oppressors, the evil), the sheep (the helpless, the victims) and the sheepdog (those who help and save the sheep from the wolves). For Kyle, he is a sheepdog who protects the US soldiers in Iraq with his sniper and openly says: "This is the greatest country in the world and I want to protect it". He does his job even when a Iraqi child wants to throw a grenade, but not with an easy heart. The scenes of his return home are particularly well made, implying that Kyle may have suffered from PTSP, especially the scene where he is watching TV and sounds of gunshots are heard off screen, but as the camera drives behind his back, it is revealed that the TV is actually turned off. However, the approach to the story is not quite ideal: if the film was made in the 70s, Kyle would have been a clear anti-hero right from the start. All the American characters who are shot are humanised and given an emotional dimension (Biggles and Marc, for instance - his funeral is shown, as well as his family and mother mourning after him), while all the Iraqi characters are kept at distance, we never see the effects of their deaths on their family members and are only shown for 5 seconds of being shot - the film is exceptionally well made, and Bradley Copper is excellent in the leading role, but such a disparity just keeps growing throughout the film, until it corrodes it. With this story, Eastwood took too many compromises, when as a director he should have been far more critical.