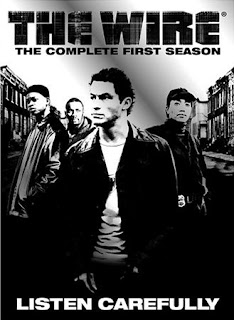 Baltimore. The police department is given consent to investigate a drug network run by the ominous Avon Barksdale and his associate Stringer Bell. The police crew consists out of detective McNulty, commander Daniels, detective Kima, Herc, Carver, Bunk and others, while they are overseen from the Department by Commissioner Burrell. They use a secret wire to tap the pagers of Barksdale's henchmen who sell the drug on the streets, as well as a couple of snitches. Just as they were nearing a breakthrough, the are given order from above to shut down the investigation and arrest those they have. Kima is wounded in a shooting, while the incomplete investigation left Berksdale and Bell behind bars only with mild a sentences.

David Simon's crime TV series "The Wire" built up quite a following: it holds an incredible, unheard of 9.4/10 rating on IMDb. While that is definitely overhyped and overrated, "The Wire" is still a different kind of series in the genre, since it directly, unglamorously shows the dark side of America, the ghettos where teenagers are manipulated into selling drugs on the street, as well as a very vast depiction of a police department painstakingly tapping their pagers in order to build up a case and arrest them. There are several interesting characters that break some cliches of the genre: two that stand out the most are gangster Omar, who is actually gay, and D'Angelo, who undergoes a grand transformation from an obedient accomplice of Barksdale to a person who develops a conscience after so many people are killed and the mafia methods develop an almost Totalitarian grip around his life (in episode 1.13 he openly admits to the police: "I felt freer in jail than I was at home").

In the conventional wire tapping story, an interesting subplot emerges when the police find out that the trail of money leads them to high ranking politicians, who are given funds, and thus it comes as no surprise that the Commissioner is putting pressure on Lieutenant Daniels to finish the investigation before it gets "too deep" - in episode 1.12, he presents some files and says to Daniels: "FBI field reports. You came to a lot of money quick. You can go to jail just as quick if I start asking the right questions. This case ends or you are done." A couple of good details mange to intrigue as well: for instance, Omar, a wanted refugee, checks if his bubblegum is still attached to the door before entering his place, or a scene in 1.10 in which a detective demonstrates how to measure a distance in footsteps by attaching a 30 inch rope to Shardene's legs and then letting her walk a few steps to "remember" walking that precise distance. One of Omar's quotes in episode 1.8, during a failed assassination atempt, already became legendary: "If you aim for the King, you better not miss". However, "The Wire's" flaws are in the too cold approach to the narrative, with little vent for sympathy or humor, as well as in too much empty walk here and there which dissipates the storyline into some 30 characters, of which not everyone is that interesting to watch all the time. There is a rewarding finale with a point at the end of season 1, but it takes way too long to finally get there, and takes up way too much time. As such, it is a good, yet not an all-encompassing classic as some would wish it, since not every sequence is as a gem as the one where detectives McNulty and Bunk almost trick D'Angelo into confessing by writing a letter to the "children" of a killed witness - even though that is actually a photo of Bunk's children.