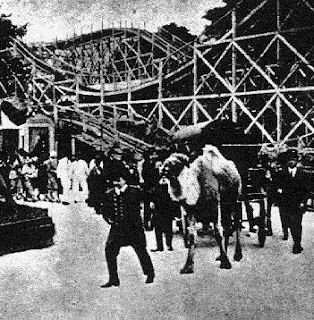 Two men jump into the screen on the rooftop, and fire a cannon. A series of montages: a ballet dancer turns out to be a bearded man; two men play chess on the rooftop until they are interrupted by a splash; a ship in double exposure "swims" across the city. A hunter shoots at an egg attached to a string, and a pigeon comes out of it and lands on his head. However, another hunter shoots at the pigeon and instead kills the man. A camel drives the coffin for a funeral, but the carriage runs away and everyone has to run after it.

The film that Ante Peterlić considers the "first chef-d'œuvre of the French Dadaist film movement", "Entr'acte" is principally a film exercise and director Rene Clair has a field day playing and joking with the audience through his wide array of cinematic techniques. With a running time of only 20 minutes, it is luckily also compact enough not to strain the patience of the viewers too much, even though its stylistic practice is inspired enough to warrant even a longer running time. The first half is assembled out of vague, standalone episodes that still mirrored the efforts of the early cinema artists to articulate what the movie media could all do, whereas it features some interesting cinematic techniques (double exposure, slow motion, Dutch angles, close ups). However, the second half is certainly the best part of "Entr'acte", since it combined all that surreal chaos into a harmonious story - the episode in which a hunter gets killed by a hunter, and a camel pulls his coffin on a carriage, only for the carriage to get loose and roll downhill, forcing all the mourners to literally run after it - evolves practically into an epic slapstick chase (involving even ships and cars) of burlesque (black) humor. It is the highlight, and luckily takes up over half of the film. Clair assembled a small classic, a one that would later influence a lot more surreal-abstract films, especially the ones by Bunuel.