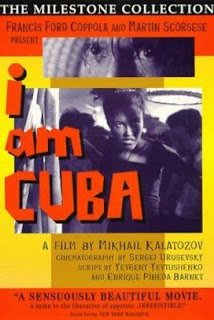 Four stories of life in Cuba before the revolution: a poor girl, Maria, introduces herself as Betty and dances with rich Americans on a party in Havana, until she is forced to become a prostitute and sleep with one of the Americans for money in her hut. The next morning, her fiance finds her in the hut in bed with the American, who quietly leaves... Upon hearing that his entire land was sold to the United Fruit Company and that he must leave it, old farmer Pedro puts his entire sugar plantation on fire... A group of students does not believe the rumors that Fidel Castro has been killed and wages a protest march against the government of Fulgencio Batista... A poor farmer allows Castro's rebel to have a lunch in his hut, but throws him out quickly because his gun makes the farmer nervous. The government bombs indiscriminately, destroying the farmer's house and almost killing his wife and family. Thus, the farmer joins the rebels.

Mikhail Kalatozov's penultimate film, "I Am Cuba" ofers another excellent achievement of the author, which gained cult status when it was, surprisingly, poorly recieved by the Soviet and Cuban authorities and remained in a "bunker", even though they "ordered" the film about the Cuban revolution in the first place. Ironically, despite its anti-Americanism, it was precisely the American cineasts who helped the film achieve a small revival in the 90s, since such a quality would be a shame to forget. Leaving the ideological aspects aside (one can ironically contemplate that Castro's pro-Soviet Cubans probably never heard of "Animal Farm" or Holodmor), "I Am Cuba" is a marvel, a fabulous movie that shows how artists can overcome a propaganda message and enrich it into something more, a universal piece of art. Kalatozov demonstrated a dazzling and unique visual style even in his previous films ("The Cranes are Flying", "Letter Never Sent"), reminiscent of his colleague S. Parajanov: it is interesting to point out that both of them were born in Georgia. However, it is about time that Kalatozov's cinematographer gets a due credit as well, Yevgeny Yevtushenko, the mastermind who planned and organized these camera tricks, and who should get his own monument for what he accomplished.

The four stories that show the life in poverty stricken Cuba before the revolution are probably good, but they never would have had such an impact if it were not for Kalatozov's trademark virtuoso visual style, with unbelievable camera drives that seem like a forerunner to Steadicam: the opening 5-minute scene, filmed in one take, has the camera achieve a fantastic stunt when it observes a party with attractive women in a bikini on a roof top, and then it descends down, several stories, to a lower roof top, and follows another woman into the pool, until it submerges bellow water. Equally amazing are the unusual camera angles and takes of the sugar farm, filmed in wide angles, like most of the film - and arguably one of the most "impossible" camera drives of the 20th century cinema, a one that will make the viewer's head spin, the funeral scene in the 3rd story, where the camera first follows the crowd in the funeral, but then suddenly "flies" up several stories above it, reaching a roof top, and then goes on (!), "jumps" over a roof fence, passes through dozens of people sitting on a rooftop and emerges on the other side of the building, floating some 50 yards above the funeral march, which passes through the houses. How these - and other - painstaking shots were done in the 60s, remains a mystery. It is unfair to wonder what the film would have looked like if it were directed in a conventional camera style, yet that only underlines what an amazing power Kalatozov and Yevtushenko had, and what a pity it is that their own homeland forgot about them, but the rest of the world simply could not, after all these unforgettable images.