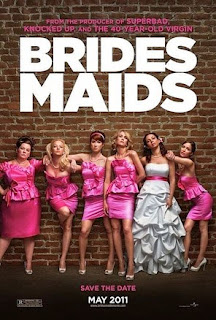 Annie is slightly annoyed that her friend, Lillian, is about to get married while she is still only an occasional one night stand for some rich guy. Lillian asks her to be her Maid of Honor, but Annie inadvertently manages to mess up everything: while looking for a bride dress, Lillian and her friends get diarrhea after Annie bought them lunch at a suspicious diner; their flight is stopped due to Annie's panic behavior; Annie insults Lillian for giving too much credit to Helen... In the end, Annie decides to reform and take a new path: she starts a relationship with a police officer and helps Lillian hold a good wedding ceremony.

"Bridesmaids" caused a lot of extremely polarized reactions: some praised it for being a refreshing female vulgar comedy, while others lamented that it is just a vulgar comedy which would have went completely unnoticed had it starred A. Sandler and other male comedians. The film is indeed a mixed bag. There is a good film inside this, but it would have left a far more decisive impression had it simply deleted 30 minutes of unnecessary banal humor which contaminated the storyline, since scenes of a woman throwing up on the head of another woman throwing up into the toilet cannot bring anything but a bad taste in its perception. Likewise, the film lacks truly great jokes and punchlines, and a lot of them just feel weird and 'autistic'. Luckily, "Bridesmaids" manages to improve its "quality posture" in the second half, when it actually turns more serious and dramatic, thus giving some redemption to the main heroine, Annie, when she decides to improve her life, mature and learn from her mistakes. This gives the film an emotional dimension which saves it later on. Some of the jokes also manage to ignite, and somewhat cover the "empty" ones - the best joke arrives in the long sequence where Annie and Helen try to outdo each other in an overlong speech contest to gain more sympathy from Lillian, and a good chuckle arrives when Annie finally dumps her "sex-buddy" who never intended a serious relationship anyway ("You are not my no. 3 anymore!"). Melissa McCarthy was given a terrible, humiliating and very ungrateful role, a female J. Candy rip-off - yet she managed to redeem herself 3 years later with a fantastic, pervasive performance in the excellent drama-comedy "St. Vincent".