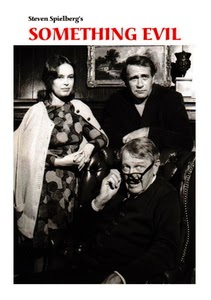 While painting a farmhouse in the middle of the countryside, Marjorie persuades her husband, Paul, to buy the house. Since Paul is a busy TV commercials producer working in New York, he is often absent while Marjorie is alone in the farmhouse with their two kids, son Stevie and a daughter. One night, she hears a child's moaning in the barn, but finds nobody there. After filmming a commercial in the house, a crew member and his wife die in a bizarre car crash after driving back home. After hearing the previous owner killed himself, Marjorie concludes the farmhouse is haunted and wants to sell it, but Paul is against it. She hires a paranormal enthusiast, Harry, to investigate, but he too is soon found dead. It turns out Stevie is possessed by the devil, but Marjorie is able to save him through her love. The family then abandons the house.

Sandwiched between his two thriller-horror classics, "Duel" and "Jaws", haunted house film "Something Evil" is a curiosity in the early career of director Steven Spielberg, and forms his unusual semi-trilogy of horror films during the early 70s. While undeniably weaker than those two aforementioned films, "Something Evil" is still a surprisingly good and nicely made film: the location scouts found the film a fantastic location of a secluded, countryside farmhouse in the middle of nowhere, which neatly sets up a mood of isolation in case of danger, and Spielberg knew very well how to slowly build up elevated, sophisticated suspense at times - for instance, the eerie sequence when an editor calls Paul to show him the footage of the commercial filmmed in front of his house, and then pauses when two red eyes can be clearly seen in the window in the background - but that high impression is not supported in the second half of the film, which turns out slightly overstretched, chaotic and repetitive as time goes by. For instance, when the mother wakes up in the middle of night to inspect a sound of child's moaning in the barn, the sequence works and has suspense. But when she goes for a 2nd time, it is not that genuine anymore. Likewise, the authors were not as inventive enough in that second half to conjure up any new "spooky details" that would cause suspense in the house, except for the standard ones like things flying through the house. The visual style is very fine and this is an overall interesting forerunner to Spielberg's own "Poltergeist" made a decade later.