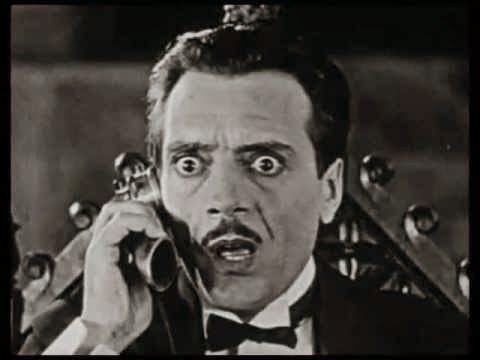 Arriving with his wife, Max goes to a club where the lights went off mysteriously. Comte de Mornay informs the guests that his castle is haunted and that he will pay a 1,000 Francs to anyone who is able to endure a whole hour of stay there. The curious Max accepts and decides to remain in the castle from 11PM until midnight. Once there, he notices what seems to be a walking skeleton, a 10 foot tall sheet, ghosts and animals in several rooms. He endures, up until the last minute when his wife calls him that a scary man is in her house, upon which Max presses the alarm button - and loses the bet. It turns out the scary man was de Mornay in disguise, who collects the 1,000 Francs from Max and pays the actors playing ghosts.

Max Linder's penultimate film, silent short cult horror comedy "Help!" was remembered for numerous macabre jokes and black humor which seemed "off" since the famous comedian committed suicide a year later - for instance, in one scene Max decides to drink a refreshing drink, only to discover the bottle has the word "poison" written on it - yet by watching it only in its own context, as a film on its own, it is a remarkably well done achievement that paved the way for hundreds of imitators about a man staying in a haunted castle. Even though the storyline abounds with bizarre-surreal scenes, it is at the same time almost childishly playful, whereas the expressionistic Linder stands out as the very unorthodox kind of guy who keeps remarkably stoic in all the commotion around him, which is refreshing and avoids the cliche of a "scared crazy" victim (Max lights a cigarette, but an arm pops out of the wall, holding a gun, and shoots the cigarette off. Deliciously, though, Max simply just lights another cigarette). Another highlight is the 10 foot tall "giant" under the sheet and Linder hanging from a hanging lamp whereas the whole image on the screen "tips" as if it might fall together with him, breaking the fourth wall. The twist ending is amusing, the mood is wonderfully aesthetic whereas Linder proves he is a very charismatic actor, on the same level as B. Keaton.