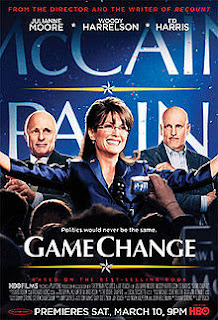 Campaign strategist Steve Schmidt recounts the '08 Presidential campaign: he initially promised his wife he will not participate, but Republican candidate John McCain managed to sway him. Together with Rick Davis and Nicolle Wallace, he took on a bold choice: sensing many women felt resigned after Hilary Clinton lost the candidate position to Barack Obama, he decided to collect those votes by having a woman be McCain's vice presidential nominee: Alaskan Governor Sarah Palin. However, while at first charming, Palin soon turns out to be a problematic person, ignoring instructions and trying to take over the spotlight away from McCain herself. In the end, Obama won and became the new president of the USA.

An HBO adapatation of the eponymous book, "Game Change" is a sly TV film satire on the '08 presidential election and an interesting insight into the campaign involving Sarah Palin, where director Jay Roach was luckily more restrained and balanced due to the very concrete script. Ed Harris may be an odd choice to play John McCain - he is a great actor, but simply doesn't look like him - yet casting Julianne Moore was a stroke of genius since she looks and acts like Sarah Palin to such an extent that it is almost freaky at moments, and thus rightfully won a Golden Globe as best actres in a Miniseries or TV film. However, Woody Harrelson's great performance is often overlooked as campaign strategist Steve Schmidt who with time regrets his choice of picking Palin more and more: in one priceless, quietly hilarious sequence, Steve explains to Sarah that the British Queen is not the Head of Government, but the British Prime Minister, upon which he has an uncomfortable smile which is quickly covered up when he takes a cup of tea. The main controversy for some critics is still if Palin was portrayed objectively or was the film just simply another attempt at mocking her: indeed, at times it almost comes across as if the writers are lingering some of her ocassional lack of knowledge to such an extent that she is presented as Forrest Gump, culminating in the questionable scene where Palin yells at Nicolle after the disasterous Katie Couric interview and throws the cell phone at the wall, yet she is also presented in a positive light at times (loves her kids and country). Either way, it is an easily accessible and engaging film, and a warning on political candidates who are trying to appeal to the masses in any way possible, no matter how cheap, since it may backfire by attracting all the wrong kinds of crowds.