You Can't Take It With You 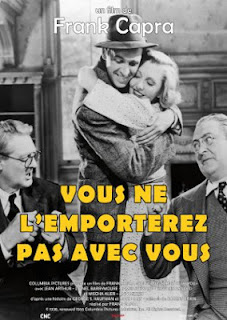 A rich banker, Anthony P. Kirby, wants to buy off a whole block in order to build a weapons factory, which will help him reach a monopoly on arms production in the US, but one old man, grandpa Vanderhoff, refuses to sell his house for any sum of money. Vanderhoff is an untypical individual, a man who founded a small sanctuary in his home in order to let almost a dozen people live there and do what they love, not what they are forced to do just to survive. Kirby's son, Tony, falls in love with secretary Alice, who is, coincidentally, Vanderhoff's granddaughter. Kirby is extremely against Tony's marriage proposal, but after he manages to buy Vanderhoff's home, Kirby realizes his life is empty. Kirby thus returns the house to Vanderhoff, accepts friendship over money and allows Tony and Alice to get engaged.

By winning two Oscars, for best picture and director, the movie adaptation of George S. Kaufman's and Moss Hart's play "You Can't Take it With You" managed to assure Frank Capra's final best director Academy Award, his third in only one decade, but it is somehow difficult to shake away the feeling that his first two wins, for "It Happened One Night" and "Mr. Deeds Goes to Town", were more justified than this one. Capra and his screenwriter Robert Riskin picked the play because it addressed some of their humanistic beliefs and motives, revolving around an individual, grandpa Vanderhoff (great Lionel Barrymore), who transformed his house into a sanctuary where a dozen people would do what they love, not what the society forces them to do, practically mirroring Capra's previous film, "Lost Horizon", just setting the 'safe area' for the good in the American city - Vanderhoff's family is unorthodox for its honesty, for being what they are, but they are more than just Addams Family in a pleasant-utopian way -  yet the story rehashes too much of his frequent stereotypes, such as the optimistic end that shows how having a friend is more important than money, the meaning of the title, i.e. that you cannot take your money into the grave, whereas the scene where Ramsey storms Kirby's office to give him a lesson practically echoes the similar sequence where a poor farmer storms Mr. Deeds' house to scorn him for his wealth. The movie lacks humor - it needed more such moments as the great little scene where Vanderhoff asks an attorney to "do something about his twitch", upon which the latter gets a grimace on his face - and is slightly corny-sentimental at times, exhausting itself with spasmodic scenes of the family doing wacky things in the house, yet Capra and Riskin would already detect their more bitter, satirical side in the banker Kirby, who is a symbol for plutocracy and covert totalitarian tenedencies in business.