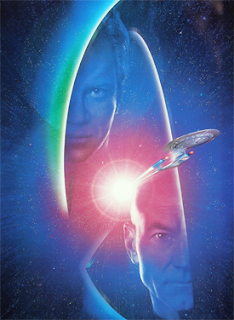 The 23rd century. While attending the first flight of the new spaceship USS Enterprise, retired Captain James T. Kirk is hit by a mysterious energy ribbon and disappears. Almost 80 years later, the new Enterprise Captain Jean-Luc Picard and his crew are trying to prevent scientist Soran from destroying a star - and thereby its planet inhabited by over 200 million people - in order to change the course of the energy ribbon, called Nexus, towards him so that he can return there. People who were in the Nexus talk about a perfect state of bliss in it. Soran succeeds and the Nexus swallows Picard with him. There, Picard meets the still living Kirk and they return back in time to stop Soran. Kirk dies in the attempt.

Critic Jeremy Conrad observed nicely that the 7th Star Trek film is "one of the better odd-numbered Star Trek films", but still a step back compared to the tight and more fitting conclusion in the previous film, "The Undiscovered Country", which gives credibility to Spock actor Nimoy who declined to reprise his iconic role in this film, finding it unsatisfying. "Generations" is a 'passing-the-torch' film that conceded the space for the next generation of the Enterprise crew and it has its fair share of merits - the opening sequence of a bottle of champagne floating in space until it crashes into the new Enterprise is impressive; the cinematography and special effects are exquisite whereas even the bad guy Soran (McDowell) is not your 'run-of-the-mill' villain who reveals to be a far more complex character than one might expect ("There was a time I wouldn't have hurt a fly...", he says in one scene) - but after closer examination it is sadly obvious that the accessory elements are somehow more convincing than the main ones, since the sole story (an energy ribbon, "Nexus", that makes every wish come true) is an awfully unconvincing rip-off of "Solaris", that is both illogical ("One cannot fly into it - it must come to you") and uneven while drifting away from science-fiction into fantasy and magic, even though pseudo-science never truly benefited a Star Trek film ("Part V: The Final Frontier", for instance).

The concept is full of huge plot holes (is it really necessary for Soran to destroy whole stars in order to advert the "Nexus" towards him? Why not simply go with a spaceship and stop in front of the route of the "Nexus"?), yet not as insane as the reboot film from 2009. Unfortunately, the new crew did not have enough room either since all of their characters were written as mere extras (Riker, Worf, Crusher...), not even the main character Picard, except for a brief emotional scene of loss. The only character who shined with full light was, ironically, android Data who experienced a few vivid and comical adventures after trying out an emotions chip: in one particularly memorable scene, Guinan pours him a drink, he tries it, makes a grimace but cannot explain what this new feeling is. Guinan says: "I guess it is disgusting, right?" The curious Data agrees and is so overwhelmed with this emotion that he instantly orders another drink to explore more of this "disgusting" new feeling. The basic story is silly, yet "Generations" still has an iconic landmark of Picard and Kirk meeting for the first and last time, making their screen time in the last 20 minutes of the film worth just a little bit more.