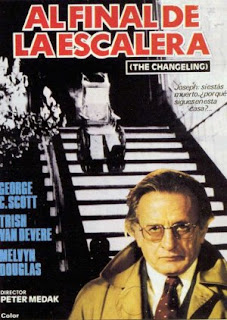 After his wife and daughter died when a truck accidentally smashed their car on a snowy road, composer John Russell wants to lead a secluded life, thus inhabiting an abandoned mansion in Seattle. However, he soon hears unexplainable sounds in the house. Researching, he discovers that a little boy in a wheelchair, Joseph Carmichael, was killed there and buried in another house, so that he could be switched by an another boy, who could take the post of the Senator and inherit his family's wealth.

Even though it eventually established quite a cult following in some circles (for instance, Scorsese once picked it as one of the 10 scariest movies he ever saw), forgotten "The Changeling" is far less a horror and much more a somber and sad mystery drama about suppressed secrets of the deceased that need to be resolved by the next generation. Using unusual camera shots, Peter Medak builds a quiet kind of 'haunted house' film, relaying especially on the excellent performance by George C. Scott to carry the story, resulting in a fine 'kammerspiel'. However, the opinions that "The Changeling" is "deliciously scary" are rather overhyped: as already said, the movie is for most part a drama, while Medak demonstrated the intensification of suspense only in four scenes (the seance sequence; the tape recording; the empty wheelchair that chases after a protagonist and to a slight extent the falling ball on the stairs), yet there is too much calmness between them to really ignite that spark. Melvyn Douglas, in one of his last roles before he would pass away a year later, shows again his tight professionalism as well as a sense to take a risky part when he plays the Senator. The ghost mystery and its resolution are rather predictable, some solutions are 'rough' (for instance, the opening part involving the death of the hero's wife and child do not have that almost any function in the story), yet as a whole, "The Changeling" is a quality made achievement, and it seems that some future movies borrowed a few ideas from it, like "The Sixth Sense"

It could be argued that "Ringu" (and by extention, "The Ring") borrows heavily one of the film's subplots.