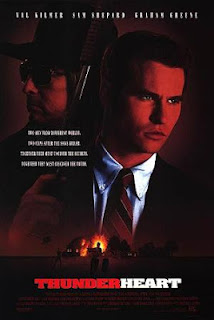 FBI agent Ray, himself of Sioux descendant, is sent to a South Dakota Indian reservation together with partner Frank in order to investigate the murder of Leo Fast Elk. The area is practically in the middle of a civil war waging between Indians loyal to the US and Indians who are members of ARM - Aboriginal Rights Movement - that aims to establish an Indian state encompassing North and South America. Frank arrests ARM member Jimmy for the murder, but Ray and Native Walter discover a conspiracy to mine for uranium in the reservation that pollutes the river, all set-up by Frank in order to achieve profit.

Towards the end of the 20th century, several films showed up that moved far away from the typical 'Cowboy and Indians' scheme and awakened the Indian emancipation by showing the recent US history from the long suppressed Native American perspective, led overwhelmingly by "Dances With Wolves". One such contribution was "Thunderheart", an interesting ethno-crime drama loosly based on the Wounded Knee incident that flows smoothly thanks to sharp cinematography, clear narrative and a sensibility for Native American culture in the story of an "official" FBI agent, Ray (Kilmer, himself of Indian descendant), who loosens up and slowly returns back to his roots when the magic of his ancestors makes his blood boil. Graham Greene shines again in the supporting role of police officer Walter - the defining moment for his character shows up when he says that even he played Cowboys and Indians as a kid, but always played G. Cooper because he was taught to suppress his heritage - whereas the mood is fine, even avoiding the 'love story' cliche that could have emerged between Ray and Maggie, yet the story is a tad overlong, standard and occasionally takes too much time to fully ignite. It's a fine and thought-provoking film, especially thanks to the twist ending, yet only here and there does it truly make a leap from a 'good' to a 'great' film, such as the refreshingly esoteric sequence where Ray participates in the Indian seance at night and sees vision himself.