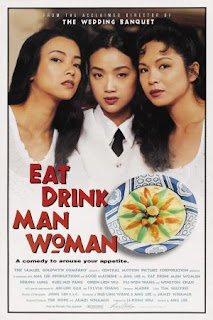 Taipei. The old master cook Zhu still works at a restaurant despite the fact that he lost his ability to taste. He is widowed and lives with his three grown up daughters: Jiazhen, Jiaqian and Jianing. Even though she is the eldest daughter, Jiazhen doesn't have a boyfriend, is a Christian and works as a teacher in a school. She scorns a student because he had a love letter, but when she starts receiving love letters herself, she starts questioning her life. It turns out students were actually writting those letters, but she marries a volleyball player... Jianing works in a snack bar and starts a relationship with the guy who was dumped by her colleague. She gets pregnant and moves to his place...Jiaqian is bitter at her father because he persuaded her to study instead of helping him cook, and now works at an airline company. She stumbles upon a guy who allegedly broke Jiazhen's heart in college, but it turns out she just made that up. When Zhu announces that he will marry the former friend of her oldest daughter, Jiaqian stays to cook for him. She makes a delicious meal that brings his taste back.

Food is to "Eat Drink Man Woman" what guns are to Tarantino's movies and instruments are to musicians - catalysts that intensify a theme and make it a passionate work. In his 3rd movie, nominated for a BAFTA, a Golden Globe and an Oscar for best foreign language film, director Ang Lee achieved a masterful delicatesse, a great movie about everyday family problems that is so simple and yet so engaging - once you give it a chance and watch only 5 minutes of it, you instantly get hooked and want to see it to the end. Even though this is suppose to be a drama, "Eat Drink Man Woman" contains wonderfully optimistic emotions, elegance and sweet humor: for instance, when Jiazhen, who works as a teacher, throws a lost volleyball down from her class on a storey down to a volleyball player, the team jokingly cheers: "Look, she is throwing a bouquet!"; during a test, a student is hidding cheat-notes in his shoe; Jianqian doesn't want to sleep with the guy who supposedly broke Jiazhen's heart in college, but then she finds out from him that they were never a couple in the first place! Out of the three daughters, Jianqian and Jianzhen are fully developed characters, with only Jianing turning out slightly less so, yet the three intervened stories from their lives, and the fourth revolving around their father, are so tight and strong that this doesn't deter from the whole, combining themes of love, passion, food, family and slice-of-life. Even though this is a Taiwanese movie, it is universally appealing - it doesn't matter if you watch it from Vancouver, Johannesburg or Kyoto, you will get it from every perspective you take it.