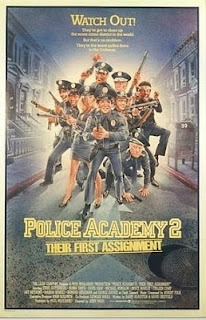 When a crime wave hits the city, captain Pete Lassard calls the recruits from the Police Academy to his precinct to help. However, Mauser does everything to sabotage the work of the recruits in order to topple him and take the position of the captain. Mahoney, Jones and Hightower have a tough time, whereas Tackleberry falls in love with police woman Kirkland. After Mauser takes over, Mahoney gets expelled because he made a prank on him. However, Mahoney is able to disguise himself as a punk and infiltrate the location of the gang led by Zed. The police storm the place and arrest the gang.

After the first "Police Academy" film became a smash hit, the producers expressly assembled a sequel which isn't even that half-bad since writers Barry Blaustein and David Sheffield actually worked creatively with the new director, Jerry Paris, achieving an easily watchable and funny comedy. The storyline rehashes old stereotypes from the first film, clumsily stumbling over dumb jokes or silly pranks (the infamous sequence where Mahoney switches Mauser's hair shampoo with glue during his shower) whereas the second half quickly becomes stale. However, Paris has a surprisingly sure hand as a director at times, which is visible in such hilarious sequences like the one where Tackleberry "persuades" a spoiled kid to go out of the car and go to school by throwing tear gas in the vehicle (!) or when Jones creates a 'hyena chewing' noise while a snobbish couple was eating near his table. Also, Zed and Sweetchuck were welcome additions to the cast. Part 2 distanced itself from the original both in style and substance, though still not so much as other sequels.