The Goal of My Life 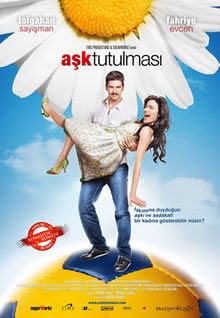 Pharmaceutical salesman Ugur is a completely devoted fan of the Fenerbahçe football team, so superstitious that he is often performing unusual rituals in order not to "jinx" them into losing a football match. After he has a minor car accident, he meets the attractive Pinar, who works in a insurance company. However, their mothers want to marry them, so they arrange a meeting between them. Despite their initial reluctance, Pinar and Ugur fall in love. Unfortunately, when Ugur proposes Pinar, her father objects because of his supersticiuous nature. Pinar suffers an asthmatic attack and lands in a hospital. Ugur organizes a final ritual - all fans avoid the Fenerbahçe match in order for Pinar to restore her health. And it works.

This fun football romantic comedy evokes the tone of 'good old school' Turkish films from the 60s and 70s, gaining much momentum thanks to the two main actors Tolgahan Sayisman and Fahriye Evcen. The down point to "The Goal of My Life" is that it simply doesn't have such strong density of jokes, filling too much empty spaces with either backward macho cliches which are unnecessary for such a light story (Pinar's ex-boss) or melodrama (especially towards the end), which reduces the viewers' pleasure. At times the story seems like a TV-movie, yet it gains elan thanks to those jokes it has - the biggest delight is watching how the superstitious Ugur is performing various rituals hoping he will somehow not 'jinx' his Fenerbahce football team from losing a match. For instance, he childishly clings to Panir's feet during a TV broadcast of the match, thinking this will somehow have a "Butterfly effect" in Fenerbahce winning, or goes to the cinema during a match because last time he did so "Fenerbahce won". The small supporting role by Panir's father is also a small delight because he acts like Ugur's older counterpart when he says to his wife that he will just go out for a walk because his doctor forbid him to watch football due to his weak heart, but in the next scene he is seen on TV in a full stadium, cheering like a lunatic.