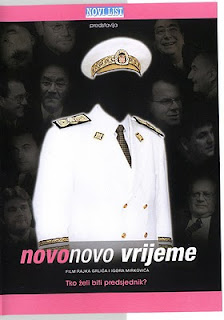 In 1991, Croatia declared independence from Yugoslavia, but the suspicious party HDZ came to power, led by Franjo Tuđman, that closed down 750,000 workplaces and started an nontransparent programme of privatization. When Tuđman died on 13 December 1999, the next elections where set on 3 January 2000. This film follows that campaign: HDZ will lose even though it was 100 % sure in its victory, while the social democrats, the SDP party, and its coalition, led by Dražen Budiša and Ivica Račan will triumph. During the presidential elections, Budiša and outsider Stipe Mesić were two most prominent candidates, the latter winning in the second round.

Humorous documentary "New, New Time" follows and documents the chaotic period of the Croatian election in 2000 and all the sleazy, unbelievably stupid political messages from some parties aimed to attract the votes of the naive masses. Director Rajko Grlić and Igor Mirković followed numerous politicians around that time and extracted 12 hours of raw footage, which was then shortened to less than 2 hours of running time in this form and even distributed in the cinemas, grossing apparently over 80,000 $ at the box office. The film is too mild and lax, whereas the comical situations show up only some 15 minutes into the film, but as a whole it's still an interesting and amusing achievement that works almost as an 'anti-nostalgia' for those chaotic times. It's fun to watch how, for instance, the microphone falls down in the middle of the speech of a politician, how Budiša and future Prime Minister Račan sold fish on the market in front of the cameras to establish their "average Joe" status for the public, how some estimated that Stipe Mesić won't even get 5 % of the votes as a presidential candidate (but he later actually won) or the now legendary scene where the camera captured how the Minister of Finance Borislav Škegro apparently stole a bottle of whisky at a party. However, as it is known, a documentary is only as good as the events that unravel in front of the cameras, and here not that many great events actually happened, though they were moderately amusing.