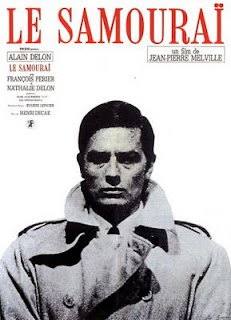 Jeff Costello is a payed hitman who lives alone in an apartment with a bird in a birdcage. After an assignment, where he killed some club owner, he gets picked up by the police in a routine gathering of potential suspects. Even though he has an in advance prepared alibi from a hired prostitute, the Commissioner is certain he is the killer. Still, due to lack of evidence, he is released. Due to such a blunder, the mafia boss decides to kill Costello. Still, Costello kills him. He bonds with a singer in a night club and deliberately points with an empty gun towards her so that he gets shot by the police.

Director Jean-Pierre Melville - whose quote that "even the worse director can once make a great film" became famous - and his sad-melancholic-minimalistic crime drama "The Samurai" often get mention from critics at numerous occasions. It's a matter of an intelligent and calm film where the protagonist Costello, played by the famous Alain Delon, is not portrayed as a bad guy but as a lonely outsider, and, as the title suggests, as a "modern Samurai". Of course, as a realist, Melville never tries to "polish up" the bleak story: during the (only shown) assignment, when Costello meets his victim who asks for his name, he replies with: "It's not important" before he shoots him. There's a lack of that distinctive "coolness" factor and a surplus of pretentiousness, yet Melville leads the film economically whereas his cohesive low-key style is good.