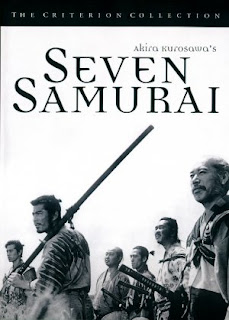 Medieval Japan. 40 bandits are constantly storming into one village in order to burn, terrorize and steal food from the people. In order to get rid of them, the farmers decide to hire 7 samurai that would protect them. In a nearby town, they find enough desperate and downfallen warriors for the job - Kambei, Kikuchiyo, Kyuzu, Heihachi, Gorobei, Shichiroji and Katsushiro. They make a barricade around the village and, after a lot of troubles and victims, manage to defeat the bandits.

Although nominated only for best art direction and costumes at the Academy Awards back in it's time, and for a BAFTA as best picture, actor Toshiro Mifune and actor Takashi Shimura, the "Seven Samurai" built an enormous reputation and importance with the passage of time, making even some critics declare it as the film that viewers should inevitably put on their list if they by any chance want to see only 5 films in their entire life. With it's running time of over 3 and half hours the story is inevitably overstretched at times while out of the seven samurai at least two have been underdeveloped and reduced to only act as extras, yet the movie is still undeniably brilliant: Akira Kurosawa has an excellent sense for handling the camera, shot composition and style (a slow motion scene of a thief falling on the ground; a wide shot of a hill from which the bandits are descending from a large distance), but also action, infiltrating into the simple story the old motif of heroes that show up in the hardest crisis and embody that what people would like to believe: honor and kindness. Though, despite their ability to bring justice, Kurosawa can't resist but to add a few especially well conceived humorous moments that mock their status: in one scene, the farmers are lamenting that they can't hire Samurais who want money while they only have food, so their chief tells them: "Then find hungry samurais!" In another occasion, the wacky samurai Kikuchiyo (brilliant Toshiro Mifune) spots one lousy horse and says it's just a "fat mouse". Even though many of the revolutionary plot details seem normal today, they were really something fresh in the cinema back in those days, while the plot can be interpreted as a critique of the leaders, since the average people have to themselves take some kind of action to protect their village.