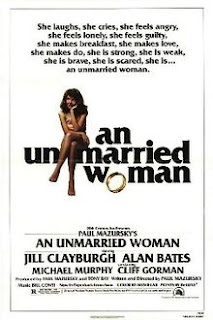 New York. Erica has been married to Martin for 16 years, and they have a daughter together, Patti. However, her life falls apart when Martin admits he is in love with another woman for over a year. Now separated, Erica tries to find a new life as a single woman: she hangs around with her three friends, visits a therapist and has casual sex with a seductive man. Finally, she starts a new relationship with Saul, a painter. It seems they fit together, but when he moves, Erica decides not to move with him, but instead stays in New York.

Paul Mazursky's 6th feature length film is an unorthodox, humorous drama about a divorced woman who tries to find her place in the world, and became noticed in the 70s since many have interpreted it as a refreshing feminist film, though it lost a fair share of its enchantment by today's standards: even though it is a 'slice-of-life' film without a clear storyline, it still suffers from too much empty walk and chaotic meandering of episodic events. The sequence when Martin admits to Erica that he loves another woman seems somehow strangely insignificant, and while it may just seem like a "necessary evil" to transition to the real 'juice' of the film, the level of the narrative does not improve significantly after it, either. At 130 minutes, "An Unmarried Woman" is overlong, and at least a quarter of its moments screams "deleted scene" since they do not add much to the film, since Mazursky was not especially inspired in this concept. Luckily, though sparse, Mazursky still has some good lines that lift the impression of the film, such as when Martin says this to Erica in bed ("I am not much fun to live with, am I?") or when Erica a comical exchange with lover Saul ("Am I just a sexual object to you?" - "You're a bright, wilful, curious woman... who is also a sexual object."), whereas Jill Clayburgh is great in the leading role, especially in the scene where she dances the swan lake in her underwear. As such, there are clashes of feminism, emancipation and self-actualization in the film, but there is less of an insight into the human spirit.