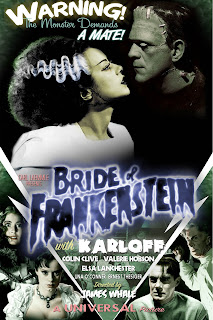 After the previous incidents, Frankenstein has been saved and survived, which reunites him with his fiance Elizabeth. However, his monster survived as well and now wonders through the forest. It is captured by the villagers, but escapes from the prison. The monster finds refuge in the hut of an old, blind man, but the villagers find him there and chase him away. In the meantime, Frankenstein agrees to join forces with mad scientist Pretorius to create a bride for Frankenstein. When the bride rejects him, the monster allows Frankenstein and Elizabeth to escape from the castle, before blowing it up with himself.

Four years after the 1st film reached cult status, director James Whale delivered a sequel, "Bride of Frankenstein", which shows a more steady director's hand, but a lot weaker narrative with little imagination compared to the original. Except for the brilliant comical opening where the 19th Century Mary Shelley (!) talks with two friends about her scary novel "Frankenstein", which 'breaks the fourth wall', the rest of the story is a standard repeat of the 1st film, consisting only out of the monster running away from villagers again and again; the sequence where mad scientist Pretorius shows his four jars in which he holds miniature humans is one of the most bizarre moments of that era whereas the decision that the title bride appears only in the last 7 minutes before the end of the film borders on sexism, since this way she did not get any character development or any chance to interact with the story, which is a wasted opportunity. Unlike "Frankenstein", which was an uncompromisingly dark film, this sequel is a 'lighter' film, avoiding  disturbing images, whereas Frankenstein's monster (Boris Karloff in his lifetime role) got more screen time, even words he can say, and was promoted to the protagonist of the film, leaving the scientist the 2nd place. Not such a sparkling sequel as many critics would like to believe, yet it has a few moments, such as comic scenes of the monster smoking and drinking wine for the first time.