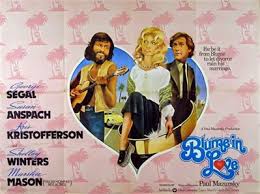 Stephen Blume is a divorce lawyer in Beverly Hills. One time, he cheats and has sex with his secretary, and his wife, Nina, thus files for divorce. Blume tries out other women and goes to swinger clubs, but realizes that he cannot forget Nina and that he still loves her, despite everything. She is in a relationship with musician Elmo. Blume makes friends with them and hangs around at their home. Finally, he forcefully has sex with Nina. Blume goes to Venice, but is reunited with Nina who expects his baby.

Paul Mazursky's 3rd feature length film, "Blume in Love" is a patchwork: the sole concept - a man cheats on his wife, and she divorces him, but he is still in love with her nonetheless - is wonderfully unique and refreshing, and has potentials, but unfortunately wastes too many opportunities on empty walk and pointless sequences which do not contribute to the story. The only interesting moment of ingenuity that Blume does in order to sway back his beloved Nina is when he starts hanging around at her home - and grows a beard just like her new boyfriend, musician Elmo (K. Kristofferson). The sole message that Nina isn't that attractive anymore, but her love still eclipses that in Blume's perspective is also interesting and somewhat bizarrely romantic. Unfortunately, too many scenes seem vague and arbitrary (why do we have to watch a 5-minute sequence of Blume slicing an apple while hanging out with Elmo and Nina playing a guitar?), there are too little highlights whereas the resolution is highly questionable, leading to a good film that nonetheless leaves a sore taste that it could have been so much more enchanting and magical.