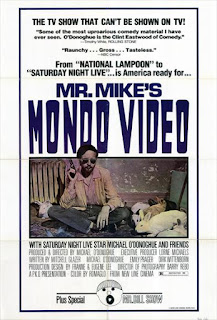 The opening disclaimer says: "Warning: the film you are about to see is shocking and repulsive beyond belief. If older people with heart conditions are watching or persons under psychiatric care, make them sit close so they won't miss anything. Do not allow children of an impressionable age to leave the room". Two people on the beach of the Mondo world chant that nations should finally drop the bomb on them... People attend the church of actor Jack Lord... Dan Aykroyd announces that he is a mutant and shows his synadctyly on his toes... Passer-bys are asked if they think capital punishment should be implemented on elephants... Spies observes the footage of a secret weapon: women wearing a bra that shoots lasers... Sid Vicious cannot sing a song due to copyright... A skeleton of a cat is eaten by rats, and left with flesh and fur... People on an island worship lava lamps.

Two great jokes: in the first, a swimming instructor drops cats in slow motion in the middle of the pool, and then watches them swim back to the shore. The second is a howlingly funny satire on religion, observing people attending the church to worship the Lord - Jack Lord - and erupt in mass hysteria when the hair of the painting of the actor moves and combs itself, causing a woman to drop her crotches only to fall on the ground while attempting to walk towards him. Unfortunately, the rest is far bellow that level, and features too much nonsense, trash and insanity instead of inspired humor. Set as a collection of sketches imitating Monty Python, "Mr. Mike's Mondo Video" is a mess, a chaotic exercise in the absurd that loses a sense for a good gag in the second half - the only exception is a one minute cameo by Bill Murray as a passer-by who is interviewed if he thinks deaf people should talk with their hands while driving. While it is sympathetic to watch these characters pretend to be 'radical' and 'shocking', when mostly they are just benign, it does not quite reach the cohesive mood of elevated comic-dadaism of the Marx brothers: too many scenes miss any point, and it seems it takes on forever for the last 20 minutes to finally end, even though the running time of the entire film is only 71 minutes. As a short film, taken the right jokes, it would have worked, but in this edition, it is exhaustingly overstretched, and there is too much space between the good parts.