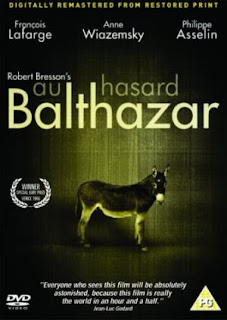 Marie, a little girl, persuades her family to buy a little donkey for their farm. Marie and Jacques, the child of the land owner, give the donkey a name: Balthazar. As a grown donkey, Balthazar has to endure several difficult tasks: plowing, pulling a carriage... he escapes and returns to the farm, where Marie is grown up as well. Her relationship with Jacques is plagued by the feud of their fathers, since the land owner is suing her father. Balthazar becomes sick, but is taken in and nursed by the alcoholic Arnold. However, when he gets violent, Balthazar runs away, and finds refuge in a circus. Later, he is used by the criminal youngster Gerard for smuggling stolen goods, and Marie sleeps with Gerard in order to leave Balthazar alone. During smuggling at night, the police shoot and wound Balthazar, who dies the next morning on the meadow.

One of the most unusual movies from the 60s, Robert Bresson's "Au Hasard Balthazar" has not lost any of its freshness or authentic awe which instilled appreciation during its premiere. Unlike most other movies where the hero is a human, here the main protagonist is an animal, a donkey, which gives the storyline a genuine feel, since Balthazar is an outsider observing the human nature and behaviour, which seems all the more educative. Bresson chooses a raw, 'rough' style, which is at odds with many modern, loud movies, yet gives it advantage since he accumulated some basic, elementary emotions, which mirror the Christian motive of the seven deadly sins. Balthazar is a symbol for innocence, and for life in general: he came into this world, without understanding it, without choosing it, and just wants to live peacefully, but is always a victim of cruelty, harshness and misery. He does not react to this, but is just a silent observer, as a testament of human evil. Yet the close up of his eyes really makes it difficult to restrain tears.

In the opening act, Balthazar cannot stand the laborious task of pulling a carriage and thus tips it, escapes from the owner - and returns to the farm he grew up in, where Marie, a young girl, protects him. On the opposite of Marie, there is the mean-spirited, arrogant Gerard, who beats Balthazar, almost as if he is jealous that Marie loves the donkey more than him. In one scene, Gerard ties a newspaper to Balthazar's tale and puts it on fire. He later searches after the donkey, and finds him standing, hiding his head in a bush. Marie tries to protect the poor animal, and is willing to even sleep with Gerard, just to appease him into leaving Balthazar alone. A couple of drawbacks can be identified, though: Bresson's trademark is to not have the actors act, but to artificially say their lines, which sometimes inhibits the overall impression; likewise, it seems there are a couple of inconsistencies regarding Marie's relationship to Balthazar (there are no scenes which show how she reacts after the donkey is rented/sold to other owners, and why she is so passive to his fate at times) whereas the subplot involving Arnold seems like a fifth wheel, thereby making the narrative thematically uneven. However, overall, "Balthazar" is still an exceptional achievement: it is inherently one of the most spiritual movies of all time - a one that contemplated that life and sprituality are not only constrained to humans - and influenced numerous later ones involving an innocent protagonist who stoically faces injustices, such as "Breaking the Waves" and "Forrest Gump".