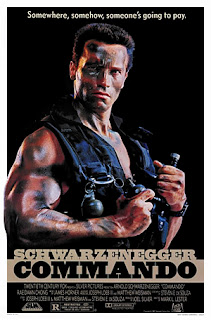 John Matrix is a former Delta Force specialist, who left his wild profession behind him and now only wants to enjoy his quiet life, together with his daughter Jenny. However, when all his former Delta Force members get assassinated, John becomes a target himself when former South American dictator Arius kidnaps Jenny and blackmails him to go to the country of Val Verde and assassinate the president, or else he will kill his daughter. John boards a plane to Val Verde, but secretly manages to get out before the take off, and then figures he only has 10 hours before Arius finds out John never arrived at his destination. John uses the time to meet a stewardess, Cindy, find weapons and trace Arius' hideout on an island, where he shoots and kills everyone, saving Jenny.

Arnold Schwarzenegger's first action film after "Conan" and "The Terminator", "Commando" is a 'guilty pleasure'. Its storyline and characters are so reduced and simplified, it is almost banal, yet it has that '80s action flick charm' that carries it, and if the viewers are willing to simply relax and not take it seriously, it is just plain fun. The moment Schwarzenegger shows up, carrying a giant log on his shoulder, the viewers are well aware this will be a light, 'tongue-in-cheek' flick, and the rest of the film follows accordingly, except for the final 20 minutes when the action cliches and sometimes splatter violence overrun it, which is problematic considering they did not contain any humor (John has infinite ammunition; he can shoot practically a hundred people while nobody can shoot him; he always knows what to do). A typical product of Reagan's America, "Commando" features a tough and strong hero who fights the enemies of his countries and sometimes promotes traditional values, yet it is just plain pure entertainment, and features that good old crystal clear cinematography from the 80s and 90s, before the arrival of digital cameras. The viewers never find out much about John, except that he can fight, nor from the other characters, though Rae Dawn Chong and a young Alyssa Milano are small jewels as Cindy, John's unwilling assistant, and Jenny, his daughter.