The Prince of Light - The Legend of Ramayana 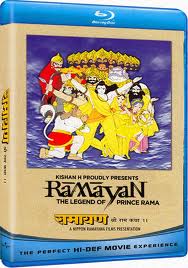 Ravana and his demons are terrorizing people, but Vishnu is embodied in prince Ram, the son of king Dasharatha from Ayodhya. Ram and his brother Lakshmana defeat the demons and gain sacred weapons from gods. Due to an intruige by an old woman, one of Dasharatha's wives forces him to promise to banish Ram, his wife Sita and Lakshmana into the forest for 14 years so that her son can inherit the kingdom. The misdeed is revealed, but Ram decides to stick to his father's wish. When Sita is kidnapped by Ravana, Ram teams up with an army of monkeys in order to battle him on the island of Lanka. Monkey warrior Hanuman is his biggest ally. In a duel, Ram slays a mutating Ravana and thus saves Sita.

One of the curiosities of the Japanese anime in the 80s and 90s was this excursion into the Indian mythology when adapting the famous epic "Ramayana", officially credited to poet Valmiki and dated somewhere between the 5th and 4th century BC. Accordingly, some of the text is archaic and today difficult to understand (for instance, after it was discovered that Ram was unjustly banished from the kingdom because his father was tricked into ordering so, one would expect that he would return back. However, Ram decides to remain in exile regardless (!) because he wants to respect his father's wishes, even when they were faked), which depletes this exotic story about a hero saving a princess from the bad guy's castle, whereas the lukewarm execution and standard animation did not help either (though there are exceptions, for instance in the scene where Ravana descends with his carriage from the sky and is "darkened" by a shadow of a tree). Talking monkeys, flying horses and giants all inhabit this fantasy epic that is more bizarre than cohesive, yet it gives a few noble Hindu messages about life that are universal, with two leitmotifs that contribute to its uniqueness: insisting on ethical behavior even during unjust, dark situations (dharma) and constant repeat of separation which, according to Indian belief, gives the reader (here the viewer) a feeling of compassion. "The Legend of Prince Ram" is occasionally a patchwork and more suitable to viewers with an open mind, yet it has some interesting scenes, like when Ram insists that they bury their enemies together with their soldiers because they are "now dead and not enemies anymore".

Interesting you tackled this one. I have an old DVD copy I had got years back from someone else but haven't sat down to watch it entirely yet.

It was pure curiosity when I found out that an anime actually made an adaptation of that mythological epic from India. You do not see that very often. It is bizarre, weird and entirely different from the storylines we are accustomed in the West, but at least you get a chance to find out more about a different culture and their mindset. I think the movie is somewhere between a 5 or a 6 out of 10 for me.