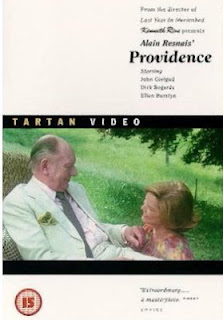 One restless night, under influence of pain and alcohol, 78-year old writer Clive Langham has a lucid dream in his mansion in which his family members are the protagonists: Kevin shot an old man half-way transformed into a werewolf and is thus put on trial by Claude who always argues with his wife Sonia because he wants his old father, a writer, to die already. Claude also has an affair with Helen. In the end, Claude shoots Kevin... In the morning, Clive wakes up and welcomes his sons Kevin and Claude who gathered to celebrate his birthday.

With this stream-of-consciousness film director Alain Resnais once again breaks the traditional movie structure and achieves an unusual, humorous and very stimulative experience that covertly "smuggled" a taboo subject about an ageing, 78-year old man, Clive, (brilliant and untypically cynical John Gielgud who is in red pyjamas 90 % of the film) who wants to die fast, but cannot. By confining almost the entire film into one restless night, where Clive is having a lucid dream - interrupted with a few scenes where he wakes up and walks across the mansion - Resnais places him as a divine being, an author with almost total control who creates a surreal Lynch like dream/story/world in order to cynically "settle the score" with his family, life and the universe. Some moments are truly bizarre and too hermetic, yet even in seemingly pointless scenes the director has a point (i.e. while in the lucid dream state, Clive suddenly has an image of people being brought to a detention camp and says: "If someone had a fatuous life, he might as well have fatuous dreams" - except that it can be seen as an allegory of Clive himself being trapped in his "personal camp", the age, sickness and bed; in another scene, Sonia compares Claude with a prison guard because he wants to banish his old father to a retirement home). Clive, a writer, is the symbol for Resnais himself: he has control over these characters in the story, while at the same time, in real life, Clive doesn't have any control over his pain and real life. It is the creative process of storytelling - on acid. Enriched with grotesque dialogues ("Father, if you have to die with such a disgusting indignity, at least do it in a retirement home where you can pay people for tolerance!"), with only a rather uneven ending that serves as a frame of the structure, "Providence" is even better than Fellini's "8 1/2" and an opulent cult experience for viewers with an open mind.