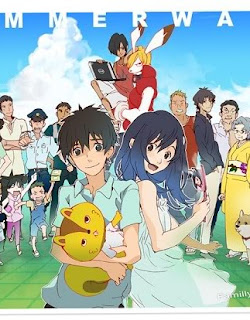 Teenage math genius Kenji has a part-time job in supporting OZ, a virtual reality social network where billions of people are registered. However, he drops it immediately when a cute girl, Natsuki, invites him for a "special job" to attend her grandmother's 90th birthday in Ueda. It turns out she wants her grandmother to believe they are engaged. After solving a math code sent on his mobile phone, Kenji is blamed for hacking OZ, which in turns causes chaos since many users linked their account with their PCs. It turns out that grandmother's grandson Wabisuke created an AI, Love Machine, that stole Kenji's account and took over OZ. With the help of computer expert Kazuma, Kenji and Natsuki manage to advert a satellite crashing on their house and destroy Love Machine.

Similarly like his previous film, "The Girl Who Leapt Through Time", director Mamoru Hosoda again showed a sympathetic sense for blending positive drama and slice-of-life teenage comedy in the well made anime "Summer Wars", a gentle satire on facebook and warning about people trusting and giving every control to the virtual system which can crash like a set of domino blocks. The two sets of narrative, one revolving around teenager Kenji enjoying playing a sweet role of a fiancee to a girl he secretly has a crush on, Natsuke, in front of her family, the other being the OZ, a fictional social network going berserk HAL 9000 style that causes chaos to the whole world, do not quite work as a harmonious match (especially since the weird CGI OZ avatars are crap), yet the excellent-fluent animation and a rather sure director's hand assure a positive experience. "Summer" is a delight, but only to a certain extent, not a full delight since it should have been more intense and emotional (for instance, the relationship between Kenji and Natsuke is surprisingly overshadowed by all those computers, which made the virtual relationships more actual than real ones). Hosoda adds small touches of family, integrity, friendship and genuine over ideal, all giving a fun little flick that stands out from the standard anime norm.