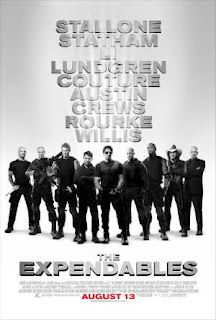 Barney Ross, leader of a group of mercenaries, accepts an offer to eliminate Garza, a dictator of the island of Vilena. However, it turns out that his contractor is just a front for the CIA, since Garza is basically just a puppet for Monroe, a former CIA operative who now raises drugs on the island. Ross abandons the assignment, but returns to save Sandra, Garza's daughter. In a showdown, Ross' team destroys Garza's mansion.

A variation of the second part of the hyped movie "The Dirty Dozen", "The Expendables" are a cheap action exploitation film with not enough "juice" to satisfy fans of the genre - by comparison, "Saving Private Ryan" had three in one: character development, artistic weight and amazing action sequences - and its status is further undermined by occasional splatter violence. The movie gained fame thanks to Stallone's idea to gather the 'holly trinity' of action movies from the 80s and 90s for the first time on one place - himself, Bruce Willis and Arnold Schwarzenegger - yet the last two show up only for three minutes, which means that "The Expendables" are still only Stallone's vehicle, without them joining him on a mission (though Schwarzenegger has a fantastic, deliciously auto-ironic cameo), supported by new action stars like Statham and Li. Except for that humorous cameo and a touching monologue by Mickey Rourke, this is basically a standard, though solid action film that needed more wit and spirit in order to develop into something more than it eventually turned out to be.