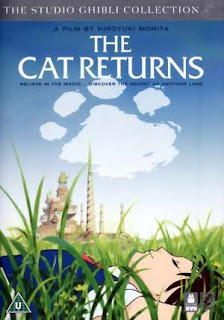 Haru is a clumsy teenage girl who is often late for school. One day she saves a grey cat from getting run over by a truck on the street. She is surprised, however, to find out the cat can talk and is actually a prince of the evasive cat kingdom. In order to thank her for saving him, those cats "kidnap" Haru into their world and turn her into a cat, so that she can marry the prince. Baron and Muta, two unlikely cats, try to save her and bring her back home. When the prince hears about it, he announces that he is already engaged. Haru thus returns to her home as a human.
Just like almost every studio Ghibli movie, "The Cat Returns" is a wonderfully animated, gentle and fluent anime, yet it seems it tried too hard to imitate Miyazaki's "Spirited Away", just switching it into the world of cats. It seizes the sympathy of the viewers the minute the Usagi Tsukino-type of heroine Haru saves a grey cat carrying a present in her mouth by catapulting it away from the street and an incoming truck with her cricket bat, yet, sadly, looses that special connection with the audience fairly quickly when Haru gets transported into the cat kingdom where she is going to be (unwillingly and - unconvincingly) rewarded for her good deed by getting transformed into a cat and marrying one. The side character of Baron, who looks like a cat version of Tuxedo Mask, is charming, yet that whole second half of the movie consists just out of one failed attempt after another since it is too wacky and bizarre - the chase sequences can go just that far before they start to become tiresome. A neat example of entertainment, yet only the first third goes somewhere.