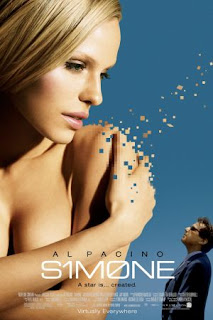 Down-and-out director Viktor manages to complete his new film "Sunrise Sunset" - even though its main actress, Nicole, walked off the set - and affirm a new star, Simone. She is beautiful, talented and - not real. Simone is namely just a very realistic CGI programme which Viktor inherited from a late computer genius. Viktor thus has trouble conjuring up to the world that Simone is a real human being and makes new movies with her, with suspicious actors who never even get the chance to see her. When everyone starts ignoring him, Viktor declares that Simone died. He is arrested for her murder but his daughter saves him by renewing Simone.

Even though it has only a 1/4 effect of his magical "The Truman Show", Andrew Niccol's "S1m0ne" still manages to ignite some small sparks of the latter because he once again coped with an esoteric theme of infiltration of the almighty technology into the human intimacy that enabled the inapprehansible. It doesn't explore transhumanism as much as "Gattaca", yet it still manages to depict how humans have to adjust to new, challenging innovations. The main protagonist Viktor (Al Pacino in another excellent performance) pretends that his CGI "actress" Simone is actually a real person, which offers a few ideas with inspiration: for instance, all actors agree to shoot a movie with her, but without her ever visiting the set, because of her alleged motto that she "copes the best with people who are not there", even though the plausibility of such a concept has plot holes. Viktor also tries to explain to the producers that Simone doesn't need make up or a wardrobe whereas especially ironic is the sequence where her concert is presented as a 3D hologram on Taj Mahal and the pyramids. One genius tangle involves Viktor being virtually ignored by everyone and thus decides to humiliate Simone by making a movie where she rolls with pigs. However, not all potentials were exploited for such a stimulative concept, whereas some loose (and unconvincing) ends, lack of emotional engagement as well as clumsy characterization prevented the story to be lifted into something more than it could have been.