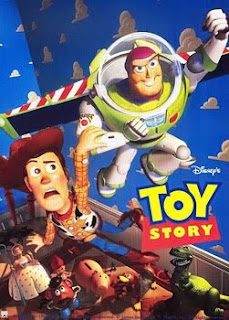 Woody the cowboy is the favorite toy of a boy called Andy. All toys come to life when humans are not around and are uncomfortable whenever their owners gets new presents which may replace them. During one such occasion, Andy gets a new toy for his birthday, Captain Buzz Lightyear, who becomes his new favorite, which is why is the now neglected Woody becomes jealous. One day, Woody pushes Buzz out of the window. He finds him on a gas station, but they get left there when Andy's mum drives him off in his car. Woody and Buzz get found by Sid, a violent kid, but manage to escape and return back to Andy just before his family moves out.

Once an excellent film, the first feature length computer animated movie, "Toy Story", seems only like a good film today, as if some higher dimension of its quality evaporated for some reason. For instance, is it really that better than the neglected "The Brave Little Toaster"? The film is still sweet and amusing, but the only truly brilliant-genius segment is the 10-minute finale that plays unbelievably perfect with style and rhythm (especially in the scene where Woody wants to light Buzz's rocket so that they can both catch up with Andy's family moving away, but just as he lights a match, a car drives by and extinguishes it!), yet the whole plot up to it is rather standard: simply too many goofy, silly and loud jokes that try to attract attention with cheap kids' methods, even though there are some clever displays of sophisticated ideas (i.e. the scene where the angry Woody wants to call Buzz names, but decides not to in front of everyone because there are "preschool toys here"). From today's stance, some flaws become more apparent, like the grotesque character of the evil Sid or the childish scene where Woody takes Buzz's arm to pretend in front of the other toys that they are "friends", however, some CGI shots still radiate with awe whereas director Lasseter shows competence is crafting an accessible, but never shallow fun.

I really enjoyed the movie. I have seen it so many times that i want to buy a personal copy of it. i have also seen the other series also. All the series are worth watching !
free movies