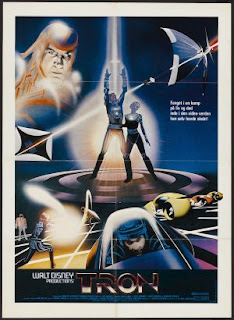 Kevin Flynn, a computer hacker, still has a score to settle with the greedy Dillinger who cheated him out of his rights for a successful video game and is now the head of an influential software company, ENCOM. The company developed the Master Control Program (MCP), an artificial intelligence computer that is starting to take over the control over everything. With two friends, Alan and Lora, Flynn secretly enters the company. However, MCP uses the newly developed laser to transport him in the virtual computer world, where he has to play deadly games, like racing cars that leave a track of walls behind them. He manages to win, destroy MCP and return back to the real world.

Science-fiction film “Tron” wasn’t well received during its premiere in 1982, but with time it attracted a cult following and more respect, since many computer users understand it today much more than back then, because such terms like “user” and “program” alone are now common. It all shows that the authors and special effects designers were visionary for their time: the early use of experimental-innovative computer graphics to conjure up the impression of a virtual computer world is fascinating and, without exaggeration, 3/4 of the film is set in that artificial 3D environment. “Tron” literally shows how it would look like if a human would enter a video game. The image alone of two racing cars, one yellow the other one blue, that both leave a path of walls behind them, which is why they have to turn fast to avoid hitting them, became a classic, though it has to be admitted that the rest of the story is rather inconclusively written, leaving a lot of points vague, whereas it also lacks spirit and humor. One of rare real examples of charm is the scene of the virtual Flynn (Bridges), equipped with fluorescent colors on his clothes, is driving a flying virtual tank and asks some questions to the navigational, octahedron-like flying device, which turns into an unpleasant shape with thorns when it answers “no” and into a cute, yellow like shape when it answers “yes”. “Tron” needed more of such moments. It’s interesting how one such movie can be so stimulating on a visual level and yet not so much on the level of imagination, but it’s still a dazzling experience and has one of the best movie posters from the 80s.
Grade:++
Posted by Marin Mandir at 5:33 PM