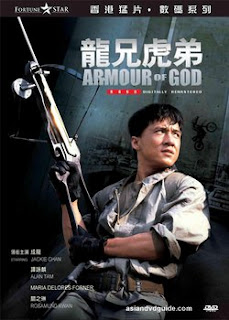 Adventurer Jackie steals valuable pieces of a knight armor - known as "Armor of God" - from an African tribe, which he then decides to sell due to financial troubles. However, a mysterious cult regards the armor as holy and wants it to rule the World. Thus, they kidnap Jackie's friend Laura in order to exchange it for the armor. He goes to Europe to their hideout in a tunnel system in a cave and rescues Laura.

Mediocre adventure action comedy with too little humor and real adventure charm, "Armor of God" became a huge box office success back in its time, ironically because the Chinese audience found the locations in Croatia and Slovenia to be "exotic", which even spanned a sequel, but today few things in this clumsy and chaotic film hold the test of time. As most of Jackie Chan's film, the dialogues and the story are the weak link, whereas the characters remain ordinary, though in his best achievements that didn't matter when he reached a certain level of 'tour-de-force' martial-arts stunts, except that this isn't one of his best examples - the stunts are still amazing (for instance, the motorcycle chase through the city which reminds of his better days) but too sparse to really hold attention through the whole story. They simply are not half as funny or imaginative as they should have been to overshadow the blatant screenplay. In cases like this, the movies of these calibre should be fast and inventive, yet this one didn't manage to wake up enough attention, though its a solid fun.