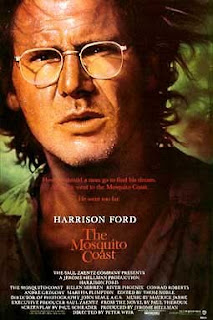 "He quit Harvard to find a more appropriate education". The 15-year old Charlie speaks about his peculiar father Allie Fox who hates American culture and thinks it will disintegrate. His new invention, a refrigerator, wasn't especially liked by a farmer so Allie quits and decides to move with his family to Honduras. Charlie, together with his brother and twin sisters, has a hard time adapting to the jungle environment while Allie forces them to work non stop. They build a giant ice machine, but three Spanish outlaws start molesting them, so Allie closes them in the machine in order to kill them. The machine explodes and pollutes the river, so the family has to move on. They arrive at a church which Allie sets on fire in a rage of insanity, and gets shot by a priest. Allie dies and leaves his family drifting on a boat through the river.

Considering the demanding and complex theme of an disillusioned idealist, adventure drama "The Mosquito Coast" is a too simple and straight forward product that at moments becomes a hassle. When Harrison Ford once said that he regards it as one of his favorite films, that says more about his personal thoughts and ideals than it does about the quality of the film. Maybe Ford has a better impression of the scale of the film than us, yet that scale is lost on the average viewer. Famous actors like Nicholson and De Niro turned down the role of the peculiar anti-hero Allie Fox because the screenplay underplayed the philosophical possibilities of his beliefs. The movie's starts fairly interesting and intriguing when we meet Allie who hates civilisation and argues with everyone, especially when his son Charlie said he "quit Harvard to get a real education": but when he forces his family to live in a jungle the story becomes an overstretched adventure a la Robinson Crusoe that the viewers will have difficulties to digest. Peter Weir's directing is good, but nothing significant happens in the jungle since the family travels here and there without a clear goal while primitivism and a raw allegory don't offer anything stimulating. The story about a family that wants to get away from civilisation and create it's own perfect world has potential, but here it wasn't exploited well enough. Helen Mirren is pretty good as the mother, while Harrison Ford was even nominated for a Golden Globe as best actor in a leading role.