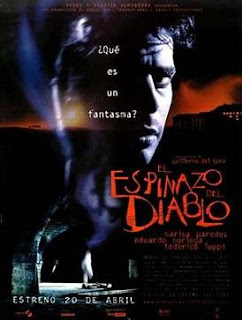 The Spanish Civil War. A little boy, Carlos, is sent to an orphanage led by Dr. Casares and Carmen, a Republican sanctuary of sorts, since his father died fighting against the Franco's Nationalists. Jacinto, a young lad, helps in the orphanage. As a newcomer, Carlos is teased by the other boys, and after the water bowl is spilled at night, he is forced to secretly go to the kitchen to get some for the morning, but sees a ghost of a boy there. It soon turns out that the missing boy, Santi, was killed when he found out Jacinto is actually a Francoist, who thus threw his corpse into the pool. Jacinto puts fire on the orphanage, killing Carmen and Casares in the process, hoping to get their gold from the safe, but only finds old photographs inside. Carlos and the boys use spears to stab and throw Jacinto into the pool, where Santi's ghost holds him until the latter drowns.

A loose forerunner to his "Pan's Labyrinth", "The Devil's Backbone" already signalled the director Guillermo del Toro's fascination in blending the trauma of the Spanish Civil War with fantasy elements that serve as a form of escapism from the said depressive reality. The cozy setting of an isolated orphanage in the middle of a vast, empty countryside conjures up a neat mood, whereas del Toro has great cinematography and uses it frequently to underline the contrast between dark and light, indicative in the constant fight between good and evil. Several good moments and observations grace the screen: for instance, Carlos is forced to get another bowl of water during the night, even though it is forbidden to enter the kitchen. He succeeds, but the bullies simply use a sling to throw a rock and destroy the bowl he held in his arms, thereby spilling his water. Since Carlos is caught in this, the principal, Dr. Casares, knows the kid will not snitch his co-perpetrators, and thus uses a trick: he allows the hungry kids to eat their breakfast, but releases Carlos to walk at the table, and thus observes three boys who look at Carlos. Thereby, Dr. Casares concludes that the three were the co-perpetrators, since all other kids would be too hungry to pay attention to anything else besides their plate. More of such details would have been welcome, since the movie is sometimes dry and takes a long time to ignite, but the finale is not as inspiring as it could have been. The ending is rather chaotic, though it neatly uses the ghost of the boy as a symbol of bad conscience that follows the orphanage as a shadow. Ultimately, del Toro reveals the meaning of the title: the devil's backbone constitutes any evil misdeed done by anybody.