I Used to Be Normal: A Boyband Fangirl Story 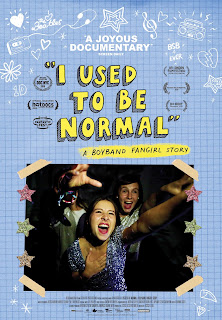 Four stories about fascination with boy bands. Elif (18) adores One Direction ever since a friend played one of their songs to her, visited several of their concerts and plays a guitar, even though her Turkish immigrant family does not want her to study music. Dara likes Take That. Sadia (25), of a Pakistani immigrant family, loves the Backstreet Boys. Finally, Susan is over 60, yet still enchanted by the Beatles who were a big part of her childhood.

A case study on mass fascination with boy bands (and idols in general), this documentary manages to illustrate the phenomenon through the perspective of four very different women. Watching these women analyze their own behavior while they talk about their motivations, actions and projections is very revealing, and, it seems, they sometimes catch themselves wondering why they are doing all of this. At one point in the film, Dara coins the "boy band theory", implying that it is just a marketing ploy with always the same restructuring of ingredients (there is always one "older brother" boy in the group, and a cute one, and a wild one) since the Beatles introduced it first. Initially, this fascination with musicians seems fun and sweet, but then it gets strange (in one scene, Sadia admits telling her boyfriend she loves the Backstreet Boys more than him; Elif imagines that One Direction is singing the compliments in their song "What Makes You Beautiful" directly to her) and ultimately one wonders what kind of a relation they are expecting when in one decade Sadia only managed to talk to them for 5 minutes— and on top of that with a barrier separating them backstage. This is rather evident in the cruise sequence where three dozen women are going after one Backstreet Boy swimming in the sea— they are not searching for a musician, they are searching for a boyfriend. One wonders if this "fake-hope-for-love" is just an accidental byproduct or a calculated ploy to subconsciously attract more fans— mostly among outsiders. The exception is Dara, a lesbian, who has this introspect: "Even know, like, what is it about boy bands that I need in my life? Whenever things are going wrong, I'm, like, boy bands are the answer, but what does that even mean?", and concludes that she needs a boy band because they "create joy" for her. In Sadia’s case, too much is revealed from her, since she admits she could not find a stable relationship and contemplated suicide. For exploring this topic in which formal entertainment spills into personal emotions, and contemplating if everyone needs some sort of obsession in life to keep motivated, this documentary succeeds as a testament of its time, presenting this infatuation as a process of growing up.