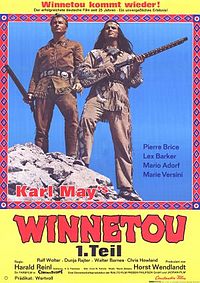 The Wild West, 19th century. Apache Winnetou is disturbed by a company that is building a railroad over Indian land. German engineer Old Shatterhand also complains, concluding that, according to the plan, the railroad was suppose to run around the Indian land, and not go straight through it, since the corrupt company contractor Santer wants to save money intended on buying the longer railroad, build a shorter one and keep the surplus in his own pocket. When Santor kills an Indian, Shatterhand and his friends start a siege of Santor's building, aiming to bring him to court. This is interrupted when angry Indians attack the entire town: Winnetou wounds and captures Shatterhand. In a trial of combat, Shatterhand convinces Winnetou that he is his friend. Santer and his gang attack the Indians on a mountain, but is killed. Winnetou and Shatterhand remain friends.

Rarely has a German film reached such mythical proportions and appeal that it is even today ingrained in the cinematic subconsciousness of its homeland as did "Winnetou", an adaptation of Karl May's adventure novel. The ingredient that appealed to the audiences was probably the feeling of "their own", German version of the Wild West, which all conjured up a 'Euro Western' that somehow managed to work, unlike numerous others which failed. While "Winnetou" is somewhat dated by today's standards, featuring a heavily glamorous and idealized account of the Wild West, where good and evil people were clearly divided, without any grey area, this all adds to its charm. As one German review observed, 53 years after the film's premiere, the film is "wonderful in its own kind of way". There is something endearing in the friendship between Old Shatterhand, a German, and Winnetou, an Indian: even though their cultures divide them, their sense for justice, a universal good, brings them together. The villain, on the other hand, is easily identifiable: Santer enjoys shooting and killing Buffalos just out of boredom; he wants to torture an Indian to discover where he found the gold whereas he even uses an associate as a human shield on the window. Two supporting characters are there to add some humor in the story: one of them is an impossibly polite Englishman who can never make the Indians stand still for a minute in order to make a photo of them; the other is Sam, who wants to flirt with an Indian woman, but then walks under a tree, and its branch takes his wig off. Another plus point are the idyllic locations in the Dalmatian hinterland, including the Zrmanja river and rock formations, which really give the film its distinctive identity.