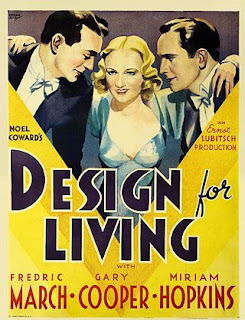 Paris. During a train ride, Americans Tom, a playwright, and George, a painter, meet quirky girl Gilda, who works in an advertising agency owned by Max. Tom and George fall in love with her, but neither is willing to give her up. Surprisingly, Gilda proposes to live with both of them in the apartment, and they agree. However, Gilda one day runs away with George. Tom achieves great success with a hit play, "Good Night, Bassington". He meets Gilda again, and this time she falls for him. When George returns, an argument ensues and she leaves them both. Later, Gilda marries Max. During a party, she is bored with her life. Tom and George return and she runs away with them.

Even though directed by classic director Ernst Lubitsch, with time it is apparent why this pre-Code drama-comedy forerunner to "Jules and Jim" did not achieve a status of a classic: "Design for Living" takes on a daring, surprisingly controversial topic of polyandry, yet its inspiration is never as sizzling or as tantalizing as its initial theme. For some other director, this is a good film, yet for someone of Lubitsch's calibre, it seems strangely pale, overstretched, melodramatic and tiresome at times. The opening gag evokes memories of Lubitsch's finest hours: Gilda enters a train and spots the two protagonists, George and Tom, sleeping and snoring, so she proceeds to draw them. Several moments seem remarkably untrammelled for today, such as the scene where Gilda persuades both men to live with them, in a threesome relationship, but says: "No sex!", as they all place their hands together to make an "gentlemen's agreement". Later, while she is alone with George, Gilda lays on a couch and just says: "We had an gentlemen's agreement. But I'm no gentleman!" In one scene, she even kisses Tom first, and then George a second later. Despite all of this, Lubitsch is overall restrained and elegantly measured, never falling into bad taste, while not dwelling or exploring this situation further. More of some great ideas would have been welcomed, since the abrupt ending leaves an incomplete impression.