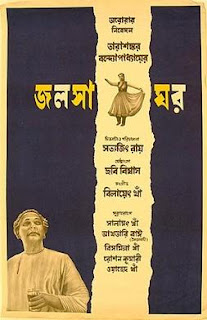 Landlord Roy enjoys holding expensive, luxurious events where he listens to musicians and dancers in his music room. He mortgages more and more money, even selling his jewels, to finance the music events. Roy allows Ganguli a piece of land, but rejects his offer to attend a music event, considering that Ganguli has no sense for Bengali tradition. Roy's wife and son, Khoka, die in a storm on a boat, while the river also floods and destroys his land. Now practically bankrupt, Roy lives alone in the derelict palace, with only two loyal servants who stayed with him. When the now wealthy Ganguli shows up again, Roy decides to spend all his last money on holding one last music event. Afterward, evoking his family heritage, Roy rides a horse, but falls and dies during the ride.

Satyajit Ray crafted this minimalist, quiet drama as an allegory on transience and the futile attempts of people to try to stop the change of times: while the story underwent several interpretations, including the clash between the traditional and modern culture (evident in the main protagonist Roy despising Ganguli, who embraces Western style of music), the main theme is about Roy being unable to adapt to changes around him, until he himself becomes "extinct", which makes his irrational infatuation with the music room a symbolic form of escapism from the harsh reality. Several details evoke the corrosion of time (Roy observing a cricket in the drink or a spider walking over the painting of his ancestor) and Ray found a grateful leading actor in the expressionistic-tragic Chhabi Biswas, whereas one of the most memorable moments remained the famed 7-minute sequence of a girl performing an elaborate dance in the music room. Interestingly, every music event in the room represents a chapter in the story, shaping it ever closer to the bitter conclusion. While critically recognized, "Jalsaghar" is still a little bit overrated: it suffers from pacing issues and an occasional "empty walk", whereas Ray did not manage to conjure up a little more ingenuity or versatility than the rather slim storyline. A very elegant example of movie making, with a palpable feeling of fatalism when Roy nostalgically senses that the end of his era also signals the end of his family heritage.