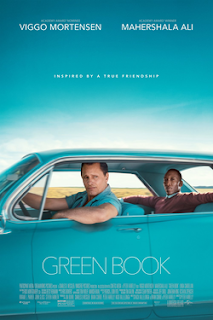 New York, 1 9 6 2. After a night club is shut down, bouncer Tony Vallelonga has to search for a new job to feed his family, wife Dolores and two kids. He finds a part time job as a chauffeur and personal assistant of the wealthy African-American musician Don Shirley, who intends to spend two months going on a tour with his band, Oleg and George, to perform in the American South. While Tony's "raw" attitude initially annoys him, Don becomes his friend during the trip. They encounter several racist people in the South, and Don is even forbidden to dine at a place where he was about to play the piano. Returning back to New York on Christmas, Tony invites Don to spend the evening with his family.

Peter Farrelly managed one of the greatest comebacks in film industry with "Green Book", a calm, untypically solemn and serious 'social issue' film for him, which garnered several awards. "Green Book" is a good film, but its main problem is that it would have left a far higher impression if it was released in the 60s, and not in 2018, when such moral anti-racism stories are rather routine and a dime a dozen. It is basically a restructuring of "Driving Miss Daisy", except that the two roles are reversed: unlike "Daisy", here the upper class, educated boss is African-American, while the White man is the driver "simpleton". Their friendship works mostly thanks to the two excellent performances by Viggo Mortensen as the "raw" Tony and Mahershala Ali as the cultured Don, who complete each other (Tony becomes more sophisticated while the stiff Don livens up) equipped with Farrelly's inclination towards comedy which gives it some spark. One of the funniest running gags is watching how Tony enjoys eating food non-stop, and at one instance buys Kentucky Fried Chicken to give some to Don during the drive, and to teach him to simply throw bones out the window. Another funny bit has Tony mispronounce Don's "Orpheus" album as "Orphans". However, while noble and with its heart at the right place, the storyline is at times incomplete: the most puzzling moment is the sequence where Tony finds out that Don was arrested in a spa for having gay contact with a man. The notion that Don is gay is never brought up again in the film (!), not even by Tony, which makes this scene stand out as if it was shoehorned more to increase Ali's chances to win more awards than as a plot point that has a function in the story. "Green Book" is a touching little film about friendship and mutual understanding, yet as time goes by, its narrative is more and more absorbed by explicit preaching, instead of being the other way around.