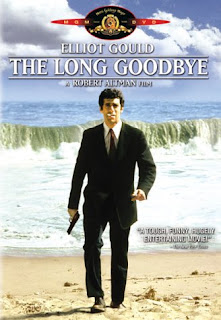 Los Angeles. One night, private detective Philip Marlowe is approached by an old friend, Lennox, who says he is in trouble and needs a lift to Tijuana. Marlowe obliges, but the next day he finds out that Lennox is sought by the police for the murder of his wife. Quickly, Lennox is himself found dead near Tijuana. Marlowe investigates and stumbles upon writer Roger and his wife Eileen. It turns out that Lennox was suppose to transport 350,000 $ from gangster Marty to Tijuana, but when Lennox' wife found out he had an affair with Eileen, she wanted to snitch him and thus he killed her. In Tijuana, Marlowe finds out Lennox feigned his death to make a clean new start. Marlowe finds Lennox and kills him.

United Artists picked a strange choice when they gave art-director Robert Altman the assignment to helm Raymond Chandler's novel "The Long Goodbye", yet he managed to give a fresh, albeit sometimes very ironic and cynical take on the source material, not also because of the cast of the main character: Elliott Gould is excellent as a "New Age" Philip Marlowe because he resembles Bogart, but also because the movie is set in modern times, which leaves the impression as if the 40s Marlowe is lost in this 70s 'counterculture' world of L.A. As with most of Chandler's novel featuring Marlowe, this one also has a meandering story with two or more seemingly different plots who all become one in the end, and Altman uses his trademark 'casual' style to conjure up an elegant mood that flows smoothly, even when things are not quite logical at times. The greatest moments arrive in the form of a few quietly hilarious moments, such as when Marlowe approaches Harry, the man who is suppose to spy him and follow him in the car, and gives him a note, saying: "This is the address where I'm going, in case you lose me in traffic", or the running gag of Malibu Colony guard impersonating various celebrities to cheer up the drivers passing by (the Walter Brennan impersonation is pure gold). However, it seems the ending lacks a certain point, leaving a somewhat 'light' impression, as if not that much was left on the dramatic front, whereas not every episode works. Arnold Schwarzenegger makes a cameo appearance as one of Marty's bodyguards, in his early cinema role.