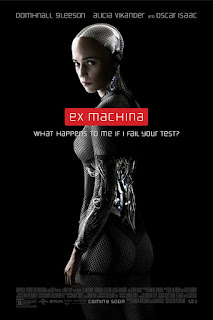 Computer programmer Caleb is selected to travel to a desolate hut of Nathan, a rich CEO of a software company, and participate in a revolutionary test: to communicate with the first ever artificial intelligence, a humanoid robot named Ava. Nathan keeps Ava separated in her own compound, and Caleb thus talks to her through a glass wall separating them. They talk about Caleb's private life, as well as about Ava's, who also dresses up as real human when she puts on a wig and clothes. Nathan finally admits Caleb that he wanted to test Ava's intelligence by seeing if she could manage to trick Caleb into helping her escape. However, Ava manages to do just that when she kills Nathan and locks Caleb in the compound, leaving the place.

"Ex Machina" is another film that seems to have fallen victim of the studio that wanted to shoehorn more action and thrills in it to appeal to the wider audience, even though it completely clashed with the story's own philosophy. When it is a philosophical piece, "Ex Machina" is brilliant, posing several thought provocative questions about the relationship between human intelligence and the upcoming artificial intelligence, including the questions about free will and programming. Unfortunately, this high impression is heavily contaminated by a completely misguided finale, a one that resorted to cheap "Frankenstein" thrills despite itself: the whole finale is utterly false and seems to exist only so that the violence can fulfil the forced criteria of conflict — just because it is the norm judged for today's endings in movies.

Ava is no monster, and neither is Nathan, making their conflict in the end pointless. It also leaves several illogical plot points behind: for instance, why didn't he simply let her out? Why didn't he install the Three Laws of the Robotics into her? Why couldn't he simply order his other robots to restrain Ava, instead of doing it himself? The conclusion in the thematically similar movie "Her" is thus far more appropriate. Still, before it, the film has several juicy, delicious philosophical debates, which are a delight to listen, especially between Nathan and Caleb ("I programmed her to be heterosexual, just like you were programmed to be heterosexual". - "What...? Nobody programmed me to be straight!" - "*You* decided to be straight? Please! Of course you were programmed, by nature or nurture or both!"; "One day the AIs are going to look back on us the same way we look at fossil skeletons on the plains of Africa"). A small jewel here is the great performance by Alicia Vikander, whose AI robot, without hair or skull, uses her expressionistic face to the maximum, and just like Data from "Star Trek: Next Generation", she has some sort of playful charm and innocence that really makes the viewers curious to wonder if there is even a fine line between human or AI.